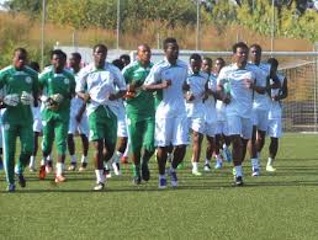 Head coach of Nigeria’s senior team, Stephen Keshi has said full training activities will commence for the 2015 Africa Cup of Nations qualifying game against Congo with fifteen players in camp on Tuesday.

Seven foreign-based players arrived the team’s camp base at the Bolton White Hotel, Abuja to team up with eight of their home-based counterparts on Monday.

With the arrival of 15 among the 24 invited to camp, training resumes ahead for double-header the Red Devils of Congo in Port Noir on Saturday and Bafana Bafana of South Africa in Uyo on Wednesday.

Keshi said his technical crew are pulling all the needed strings to achieve their immediate task which is qualifying the country for the 2015 Africa Cup of Nations.

“We have played with ourselves for sometime, now is time for business and we have to get the job done and no kidding with players and officials from Monday,” Keshi told journalists in Abuja.

“We have said we can qualify the country and we are ready for that task, now is time for action and less talk,” he said.

Meanwhile, Eagles co-ordinator Emmanuel Attah has been ordered out of the team’s training camp in Abuja, AfricanFootball.com has learnt.

“Attah is no longer in the Eagles camp after he was ordered to leave,” a top source informed AfricanFootball.com late on Monday.

“I believe he saw his exit coming because even in Uyo for the friendly against Ghana he was not himself, he was very nervous and uneasy.”

Attah, a former FCT FA chairman, was Eagles co-ordinator for over seven years.

Former international  Garba Lawal has been appointed in Attah’s place with several media reports credited to associates of re-instated coach Stephen Keshi kicking against this appointment because “Garba has been very critical of Keshi”.

It is expected that the NFF executive committee are expected to address this issue when they meet on Wednesday in Abuja.