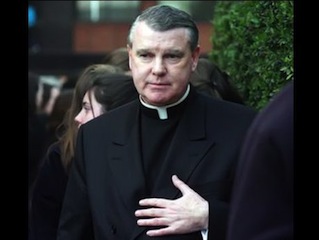 An influential Irish priest was sentenced in Chile to four years’ probation Tuesday for sexually abusing a young girl while he was the spiritual advisor of an elite school.

John O’Reilly, the local head of the Catholic Church’s ultra-conservative Legion of Christ order, was convicted last month of repeatedly molesting the girl from the time she was five.

A court in Santiago sentenced the 68-year old priest to four years and one day of “supervised freedom” — a punishment roughly equivalent to probation that involves no prison time — and barred him from working in schools or with children.

Prosecutors had requested a sentence of 10 years in prison.

“This was not an easy case. It has special connotations, at a particular school and involving a person who’s not just anybody,” prosecutor Lorena Parra told journalists as she left the courthouse, praising the decision to bar O’Reilly from working with children.

Defense lawyer Luis Hermosilla said he and his client would decide whether to appeal in the next 10 days.

The court found O’Reilly had sexually abused the now nine-year-old student at the exclusive Colegio Cumbres school in eastern Santiago between March and December 2010 and March and July 2012.

He was also accused of molesting the girl’s older sister, but the court found insufficient evidence to support the charge.

O’Reilly, who arrived in Chile in 1984, was previously one of the most highly regarded priests in Chile, which granted him citizenship in 2008.

The Legion of Christ has been beset by accusations of sexual abuse, influence peddling and other controversies in various countries.

The order’s founder, Mexican-born Marcial Maciel, stepped down in 2005 amid allegations of pedophilia and fathering several children. He died in 2008.

The group, founded in 1941, managed for decades to hide complaints against Maciel, who enjoyed the protection of high-ranking Vatican officials during the pontificate of John Paul II.