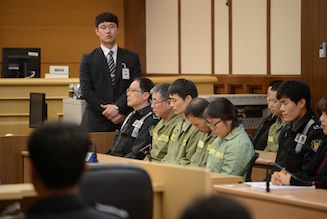 A South Korean court handed down a 36 year jail sentence Tuesday to the captain of the Sewol ferry that sank in April, but acquitted him of murdering the 304 people who died in the disaster.

The three-judge bench ruled that prosecutors, who had demanded the death penalty for Captain Lee Jun-Seok, failed to prove the most serious charge of “homicide through wilful negligence”.

But the court found Lee, 69, guilty of severe dereliction of duty, including abandoning the ferry while hundreds of passengers — most of them schoolchildren — remained trapped on board.

The ruling followed five months of dramatic, often painful testimony in the trial of Lee Jun-Seok and 14 other crew members of the Sewol which capsized off the southern coast on April 16.

Three other senior crew members, who had also faced homicide charges, were sentenced to jail terms of up to 30 years.

“We find it hard to conclude that the defendants …were aware that all of the victims would die because of their actions and they had an intention to kill them,” the bench said.

“Therefore the murder charges are not accepted.”