Who's who in the Islamic State jihadist group 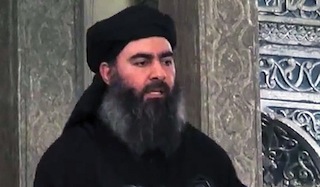 Top figures with the Islamic State group, including possibly its chief, have been targeted in air strikes by the US-led coalition in Iraq.

Reports of IS leaders being wounded or killed are raising questions about how the jihadist group is organised in the territories under its control in Iraq and Syria.

“IS’s (administrative) structure — both at the provincial and transnational level — gives all the trappings of a real state,” Aymenn al-Tamimi, a fellow at the Middle East Forum, told AFP.

If IS leader Abu Bakr al-Baghdadi has in fact been killed or seriously wounded, it could spell trouble for the group. “The thing about the Islamic State is that a lot actually goes down to the persona of Baghdadi. If he actually got killed, I don’t know who will replace him,” Tamimi said.

Details about IS’s organisational structure are murky, but its public statements as well as groups that track militant organisations and media reports point to the existence of some main elements:

-The Caliph: Abu Bakr al-Baghdadi heads both the militant group and its self-declared state encompassing parts of Iraq and Syria. His title of “caliph” is an attempt to revive a system of Islamic government last seen under the Ottoman Empire, and he has commanded Muslims around the world to obey him.

-Deputies: Abu Muslim al-Turkmani is said to be Baghdadi’s deputy responsible for Iraq, where IS has overrun much of the Sunni Arab heartland since June, while Abu Ali al-Anbari oversees neighbouring Syria, where the group also holds significant territory.

-Spokesman: Abu Mohammed al-Adnani is the group’s spokesman and one of its senior leaders. He has spoken in lengthy audio messages, but his face has not been shown in official IS media.

-Shura council: Said to be made up of senior IS figures who advise Baghdadi and carry out his orders. Some reports also indicate that Baghdadi has a separate cabinet.

-Other councils: There are reportedly other councils that deal with specific issues including military affairs, security, finance and media.

-Provinces: The group has divided up territory in Iraq and Syria that it holds (and some areas that it does not) into “wilayas,” or states. They are headed by governors, and also have local military and administrative structures.