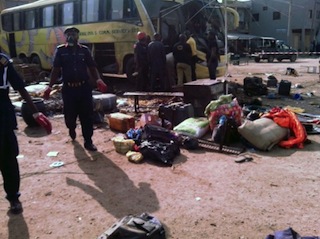 File Photo: Security officers stand near abandoned items at the scene of a blast in the northern Nigerian city of Kano, on July 24, 2014.

At least 10 people were feared dead on Wednesday after a suspected suicide bombing at a Nigerian teaching college as students were sitting exams, two days after a school massacre blamed on Boko Haram killed nearly 60 people.

The latest blast happened at the Federal College of Education in the town of Kontagora, Niger state, some 150 kilometres (90 miles) from the state capital Minna.

Nigerians have come to expect near daily Boko Haram attacks in far northeast but Wednesday’s blast will raise fresh concern if linked to the Islamist uprising.

Niger state has not been touched by the insurgency in more than two years and Kontagora is roughly 2,000 kilometres (1,200 miles) from Boko Haram’s northeastern stronghold.

A suicide attack in an obscure town far from the epicentre of the rebellion could reinforce fears that Boko Haram remains a disparate group with active cells across the mainly Muslim north.

The explosion in Niger state happened just two days after dozens of students were killed in a suspected Boko Haram suicide bomb attack at a school in the northeastern state of Yobe.

A school official who requested anonymity said the casualty toll had risen to 58 dead and 117 injured, an increase on police figures which put fatalities at 47 and the wounded at 79.

The massacre in Potiskum was one of the worst in the five-year insurgency against a school teaching a secular curriculum, to which the Islamists are opposed.

“We have dispatched our teams from here,” he told AFP by telephone from Minna.

Student Mary Okafor said the blast happened as they were sitting end of semester exams and saw everyone rush out of class.

“We saw bodies on the ground between the library and the female hostel. Among the bodies were two dismembered women who we believe were the bombers,” she added.

She said at least 10 students were killed and several others injured.

“They have all been moved to the general hospital. We have all been asked to vacate the school. The authorities in the town have asked all schools to close.”

There was no official confirmation of the death toll or whether it was a suicide attack.

Educational establishments in northern Nigeria have been hit several times by bombings in recent months.

On September 18, at least 13 were killed in Kano during a shootout between police and suspected suicide bombers, again at a teacher training college.

A female suicide bomber killed six people on July 30 when she detonated her explosives at a noticeboard on the campus of the Kano Polytechnic College while students were crowded around it.

The attack was the fourth by a female bomber in the city in a week and prompted the authorities to cancel public celebrations marking the end of the Muslim holy month of Ramadan.

The bombings were linked to Boko Haram, which is opposed to so-called “Western education” and wants to create a hardline Islamic state in northern Nigeria.

One of Boko Haram’s deadliest bombings targeting churches came on Christmas Day 2012 in Niger’s town of Madallah, where 35 people were killed at the St Theresa Catholic Church.

Violence in the area has been relatively contained since, with a handful a gun attacks targeting the security forces through 2012.

Nigeria’s prolonged offensive in the northeast has become the centrepiece of its campaign against Boko Haram.

But recent violence outside the restive region, including a jail break in central Kogi state and Wednesday’s blast in Niger highlight the wide reach of the Islamist rebels.