Carrick out of England squad with groin injury 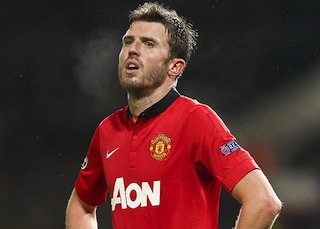 Michael Carrick has pulled out of the England squad with a groin injury, the Football Association said Wednesday.

The Manchester United midfielder will now miss Saturday’s Euro 2016 qualifier against Slovenia and the friendly in Scotland three days later.

“Michael Carrick will return to his club this (Wednesday) evening after sustaining a minor groin injury in training this morning,” said a spokesman for the FA. “There will be no call ups at this time,”

Carrick went for a scan after a light 20-minute training session at the FA’s St George’s Park training base in Burton, central England, on Wednesday and withdrew once the results were analysed.

The 33-year-old had only recently been recalled by England manager Roy Hodgson following his omission for the squad that went to this year’s World Cup in Brazil.

Carrick was also not long back from an an ankle injury he suffered in pre-season.

The last of Carrick’s 31 caps came in England’s World Cup qualifier against Poland at Wembley just over a year ago.