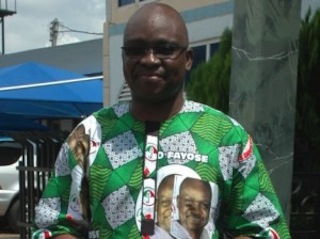 The Ekiti State chapter of the Peoples Democratic Party, PDP, on Wednesday urged the Ekiti State election petition tribunal sitting in Abuja, to dismiss the petition filed by the All Progressives Congress, APC, challenging the election of Ayodele Fayose as the state governor.

The party closed its case after calling Dr. T.K.O. Aluko, the state chapter’s secretary as its only witness while the governor, Fayose, is expected to open his defence against the petition on Thursday.

Dr. Aluko told the tribunal that the election that brought in Governor Fayose was peaceful, transparent, free and fair.

His evidence was not challenged under cross-examination.

The APC had filed the petition challenging the results of the 21 June governorship election won by the PDP’s candidate, Fayose.

The Independent National Electoral Commission declared Fayose as winner of the election ahead of the incumbent governor and the APC candidate, Dr. Kayode Fayemi.

However, the APC alleged that the election was manipulated by the Federal Government in favour of the PDP.

The party asked the tribunal to “unravel the hidden facts surrounding the election,” saying the poll was more of “a mechanical exercise than the conventional casting of votes” and also challenged the qualification of Fayose for the election.

The opposition party stated that Fayose had an ongoing criminal case with the Economic and Financial Crimes Commission and was not qualified to contest the election and cited manipulation and undue militarization of the election, as well as previous impeachment of Fayose in 2006 as grounds for the petition.