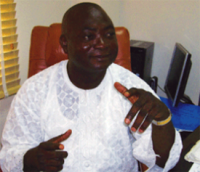 Taiwo Kolawole, Deputy Speaker, Lagos State House of Assembly, on Wednesday declared his intention to seek re-election into the legislature for the fifth term.

Kolawole (APC-Ajeromi-Ifelodun I) made the declaration while giving the account of his stewardship since 1999 to his constituency.

Kolawole said he was elected to the House in 1999 when Ajegunle was an eyesore with about 90 per cent of the roads not tarred.

“Then, people see Ajegunle as no go area, but today we can see that it has become peaceful and can also compete with Surulere in terms of roads.

“I have used my influence to attract meaningful development for my people.

“Over the years, through my personal programme called HKT Poverty Alleviation Empowerment, I have empowered thousands in self-employments and adult education.

“Many have graduated from tertiary institutions and are gainfully employed. I also facilitated distribution of transformers to various communities and provide bore holes for the community,” he said.

Kolawole said his experience in the assembly had brought development and placed Lagos high among the states of the federation.

He assured his constituency and Lagos residents that Ajegunle would experience more developmental projects if given the opportunity to return to the House in 2015.