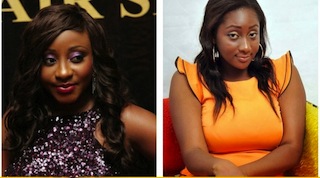 Striking resemblance of the Ini Edo and Esther

The identity of Nollywood actress Ini Edo’s twin sister has been revealed. But there is something about this ‘twin sister’, she has another name, Esther Urrah, born of another parents and obviously from another state.

According to Esther Urrah, she wasn’t aware of this resemblance with her idol until some of her friends pointed it out to her.

Her life ambition now is to meet the super actress and if possible, to play a movie role beside her.