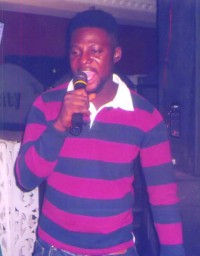 Gold, an architect told P.M.NEWS Entertainment Cafe at a concert held at City Bar and Lounge, Agege, to promote the album, that he chose the title for the album since most of the songs in the album are about love and peace. These, he set out to use his music to promote.

“I interpret what love is all about in the album and I also include some remixes,” he stated. Gold explained that he is into R & B, Reggae, Afro and Pop, adding that his songs are unique as he does not believe in copying other musicians.  He also revealed that he is contemplating a collabo with Reminisce, Tiwa Savage, Davido, Yemi Alade, Cynthia, Yemi Sax, Pasuma among others.

Tracks in the album include Komalo, I choose To Love You, Funmilayo, Baby Eee, Sweet Mother, Klareth,  Ifemi and Others.

The all-night album launch was graced by dignitaries like Chief Ola Apena, Pastor Otubajo, Mr. Chuks, industry chieftains, top music acts and his music enthusiasts, while Gold put up a fantastic performance from some of the tracks in the album.