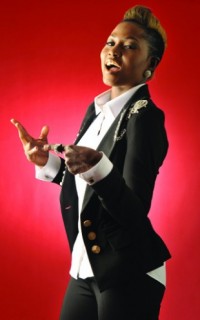 Debie Rise, star of Nigerian Idol Season 3, who was recently unveiled as a new act under 800 Records, is releasing a new single titled Match Up.

The new single was produced by ace music producer K-Solo.

Debie, who has gained reputation as an energetic performer, has recorded about four singles and would be releasing more this year before the eventual release of the album next year.

“I am not in this industry to compete with anybody. I am here because I am talented. I have passion for music and on stage I am in my element. Debie Rise and 800 Records are taking the music industry to the next level,” the singer said.

Debie stole not a few hearts during the singing talent hunt show. She has found a new support base in 800 Records, founded by Shuga Entertainment.

This has led to her flourishing, upping the ante and grabbing attention.

She has performed at Felabration, National Museum, Fotoplus Award Night, Purple Account powered by Wema Bank at Obafemi Awolowo University with the likes of Oritsefemi and Wande Coal.

Debie was born in Kaduna, Nigeria. She bagged her Bsc in Computer Science with a major in Graphics and web app development from the Federal University of Technology, Yola.