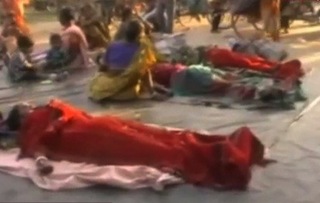 Indian police have arrested the head of a drug manufacturing company and his son on suspicion of destroying evidence related to the deaths of 13 women who underwent sterilisations, an officer said Friday.

“Ramesh Mahawar, the director of Mahawar Pharma, and his son have been arrested,” police superintendent Om Prakash Pal told AFP by telephone, adding that the two men had tried to destroy evidence.