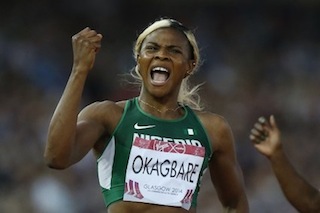 Blessing Okagbare celebrates her breathtaking feat at the Commonwealth Games

Nigeria’s goalkeeper, Vincent Enyeama and sprint queen, Blessing Okagbare were the shining stars at the Nigeria Sports Award held at the Muson Centre on Thursday, 13 November.

The Lille of France goal tender won the award for Nigeria’s best football player (male) and was also adjudged the Sportsman of the Year.

The former Enyimba of Aba shot stopper, was however absent at the event and nobody was present to pick the awards for him.

On her part, Okagbare won the award for the sportswoman of the year and track and field star of the year under review.

Her brother, who was on hand to pick the awards for her, delivered her message: “if you have a child who is showing sings of a talent, monitor that child and follow up that talent.

“It is that nurturing that has brought me to where I am today. Thanks to all who nominated and voted for me”.

Similarly, Nigeria’s golden girl, Asisat Oshoala was named Footballer of the year in the female. Her dazzling performances at the U-20 Women’s World Cup in Canada and at the Africa’s Women Championship earned her the diadem.

Ese Brume, who won a gold medal for Nigeria at the Commonwealth Games after 40years, was also given a Special Recognition award for her feat.

The awards night was also specially dedicated to Godwin Spiff-Sagbama, who was reported to be the first anchor of the event when it started about three years ago.

Footballer of the year(Male)
Vincent Enyeama

Footballer of the year(Female)
Asisat Oshoala

Sportsman of the year
Vincent Enyeama

Sportswoman of the year
Blessing Okagbare

Team of the year
Falconets

Coach of the year
Peter Dedevbo

Discovery of the year
Courtney Dike

Track and Field star of the year
Blessing Okagbare

Photojournalist of the year
Ayodele Ojo- The Sun

Weightlifter of the year
Maryam Usman

Boxer of the year
Efe Ajagba