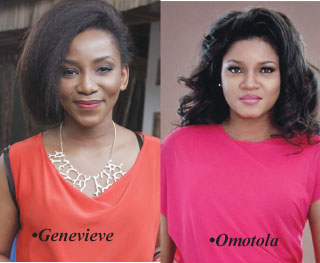 Nollywood stars, Omotola Jalade-Ekeinde and Genevieve Nnaji, will be joining soul singer, Asa, as frontliners in the global campaign to pool a million young Africans to act against Ebola in Liberia, Sierra Leone and Guinea.

An initiative of The Future Awards Africa, TFAA, the campaign will also be led by TFAA Young Person of the Year 2013, Ashish Thakkar.

“This goes to the core of what is important to me, and what should be important to all of us who are very concerned about our continent. Just when the world has begun to pay attention to Africa as a destination for rapid growth and investment, we cannot allow Ebola define the narrative. We need to put a stop to this immediately, and young people need to take the lead,” said Omotola, who has been spokesperson for Amnesty International and the United Nations.

On her part, Genevieve said Ebola has been defeated in Nigeria and this shows that with the will and resources it can be defeated anywhere else.

“We need to get involved beyond talk and beyond sympathy. As long as it remains anywhere in Africa, we are all at risk, and we can come together to stop this from happening. Join me, and join all of us now on www.stopebola.com,” said Genevieve.

The #StopEbola campaign will get young Africans to support the World Health Organization by donating social media updates and a minimum of $25 between now and the awards date via the portal www.stopebola.com.

The Future Awards Africa holds on Sunday, 7 December at the Intercontinental Hotel in Lagos, Nigeria.