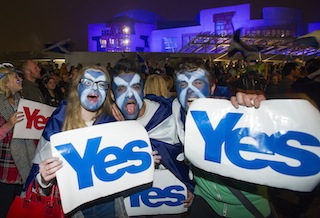 Pro-independence supporters gather at the Scottish Parliament in Edinburgh

Scotland’s ruling Scottish National Party (SNP) on Friday crowned a new leader to build on a surge of support following a defeat in September’s independence referendum that still looks set to result in greater autonomy.

First Minister Alex Salmond announced his resignation after the result, in which 55 per cent of voters said “No” to breaking away from the United Kingdom, and has now been replaced by his deputy Nicola Sturgeon.

Delegates rubber-stamped Sturgeon’s election as SNP leader at the party’s annual conference in Perth — she was the only candidate — paving the way for her appointment as Scotland’s first female first minister next week.

Sturgeon, 44, said it was a “privilege”, adding: “In Alex Salmond I have the hardest of acts to follow.”

Salmond led the SNP for nearly 20 years and spent seven as first minister, transforming the nationalist party from a marginal organisation to a major political force.

In his outgoing speech to the conference later on Friday, Salmond will repeat his belief that Scotland can still become an independent nation despite the referendum vote.

“When the history of Scottish independence is written, be in no doubt that the 18th September 2014 will be remembered as the most significant breakthrough in Scottish political history,” he will say.

“Why? Because despite everything that the Westminster establishment threw at Scotland, 45 percent of the people — 1.6 million women and men living and working in Scotland — chose hope over fear.

“A much higher number than our opponents ever thought possible when we started this campaign.”

The SNP’s membership has swelled since the referendum from 25,000 to 84,000, and Salmond said he hoped it could reach 100,000 before the British general election in May.

Although Scotland remains part of the UK, the closeness of the referendum campaign prompted the British government to promise new powers for the devolved government in Edinburgh.

Proposals are set to be outlined by the end of the month and laid into legislation by early next year.

He is a lawmaker in the British parliament in London but not the Scottish parliament, so will not be able to take over Sturgeon’s job as deputy first minister in Edinburgh.