Tunde Bakare will be president of Nigeria, says Gov. Mimiko 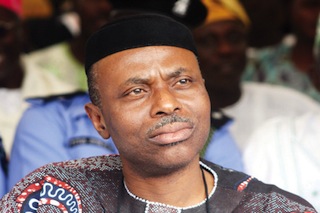 Governor Olusegun Mimiko of Ondo state believes that Pastor Tunde Bakare, the General Overseer of the Latter Rain Church will someday become the president of Nigeria.

Bakare who bowed out of active politics after his election bid as a running mate to the presidential candidate of the defunct Congress for Progressive Change, Gen. Muhammadu Buhari (rtd), in 2011 ended in defeat has returned to his gospel work.

But at the launch of his biography titled: “Moment of Truth”, is based on the life story of Bakare, Mimiko stated that his exemplary leadership qualities meant he will be come president someday.

“Bakare is an epitome of a true leadership. I see him becoming president in Nigeria someday,” Mimiko said at the book launch.

Responding, Bakare said that he would ensure that Nigeria would fulfill its destiny. “It is part of my destiny; so, I cannot shake off Nigeria from me,” he said.

Bakare is well respected for his stance against corruption, bribery and mismanagement of government funds.