World Bank warns of calamity if Ebola lessons are ignored 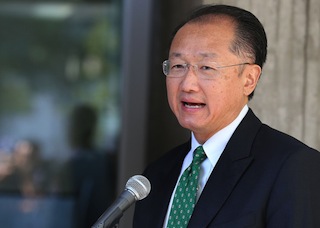 Kim called for the establishment of a multi-billion dollar contingency fund to ensure relief efforts mobilise immediately when an infection threat such as Ebola or a rogue influenza strain emerges.

Such outbreaks were not only human tragedies but also threatened to destabilise the world economy, the Korean said at the G20 summit in Brisbane, where he is promoting his proposal to leaders of the world’s most powerful economies.

“It would require something like a global health corps — people from all over the world who’d be ready to respond at a moment’s notice — (and) a fund that would disperse millions, and indeed billions, of dollars if necessary,” he told reporters.

Kim said the world was slow to react to the worst Ebola outbreak on record, which has killed some 5,000 people in Liberia, Sierra Leone and Guinea.

“The (Ebola) response was late and we all know that… if we had a flu pandemic that would move very quickly and potentially kill millions, we would need many billions of dollars dispersed right away,” he said.

“When the World Health Organisation declares a global health emergency and invokes the international health regulations then, and only then would these funds be dispersed,” he said.

He said donors would not need to give money upfront, but would instead make arrangements to raise money on bond markets, adding “this is something we do all the time at the World Bank”.

The World Bank has estimated the financial impact of Ebola in the region could reach US$32.6 billion by the end of 2015 if it continues to spread.

Kim said the crisis was far from over in West Africa, despite signs that infection rates were slowing in worst-hit Liberia, where there have been more than 2,800 deaths.

He said every single person infected by Ebola, one of the deadliest viruses known to man, needed to be tracked down.

“Ebola’s not a disease where you can leave a few cases and say that’s good enough, you’ve really got to get every country to zero… if we want to get to the endgame, that’s the way we have to go,” he said.

“Despite the pledges and the goodwill that’s been expressed, we still need much more. This is going to require many billions of dollars to get to zero in each of those three countries.”