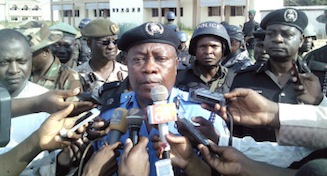 The police in Kano have confirmed the death of six persons, including three policemen, in the bomb explosion at Magarsiku Filling Station at Hotoro, Kano, on Friday.

The Commissioner of Police, Adenrele Shinaba, who confirmed the incident while addressing newsmen on Saturday, said five other persons sustained various degrees of injury.

Shinaba said the incident occurred when a suicide bomber went into the filling station pretending to buy fuel for the vehicle he was driving.

He said immediately the hoodlum entered the service station, he detonated the bomb which was inside his car.

He added that two vehicles were completely burnt down, while two others were damaged.

The commissioner said the injured persons had since been taken to hospital for treatment.

Shinaba urged the public to be more vigilant and furnish security agents with useful information to check the activities of insurgents.

He said the damage to other filling stations and vehicles nearby would have been more if the security operatives and men of the fire service did not respond promptly.

He noted that “everybody must remain vigilant in order to ensure that we check the activities of these people.

“We are lucky there are two petrol tankers which will have been burnt if not for the early arrival of the fire servicemen who quickly put out the fire.”