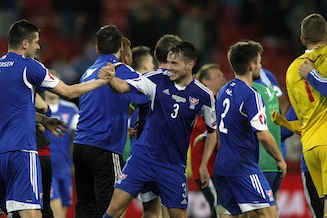 The Faroe Islands acheived their biggest ever win in the 1-0 Euro 2016 qualifier upset of Greece in Athens Friday, coach Lars Olsen said.

The islanders secured three rare away points and stunned the former European champions with a second half goal from Joan Edmundsson.

The result moved the Faroes ahead of Greece at the bottom of Group F and most likely spelled the end of the line for embattled coach Claudio Rainieri.

“This is definitely our biggest win. We achieved a victory against Austria (Euro 1992 qualifier), but I think Greece is a bigger name than Austria in football,” Olsen said.

“We knew exactly the game we wanted to do against Greece and my team played very well. We deserved to win.”

Edmundsson’s winner ended a run of three straight losses for the Faroes who have never before qualified for the finals of a major competition and usually finish dead last in their group.

“It was a great win for us. It’s been many years since the last time we won an official match, so you understand how we feel,” Edmundsson said.

“I think we had a good game today. We knew that Greece likes ball possession and we wanted to achieve a goal on the counter attack which we did. We had many opportunities. We deserved to win because we were good in defence and good at counter attacks.”

As to the future, Olsen was not even ruling out that his side could reach the next stage of the competition with the top two from each group sure of reaching the finals in France.

“In football everything is possible. After four matches we collected only three points. If we win the next matches we can succeed,” Olsen said.