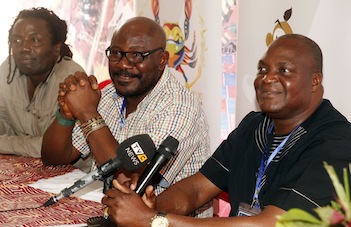 An estimated number of over Five Hundred Thousand carnival lovers and participants are expected in Port Harcourt, Rivers state, for the 2014 edition of Carniriv, the Port Harcourt Carnival, making it the biggest carnival brands in Africa.

Speaking during an interaction with journalists in Port Harcourt, the Director General of the Rivers State Tourism Development Agency, Dr Sam Dede announced that the 2014 edition of the carnival, set to hold from 14–20 December, will outstrip other carnivals both in scope and size with participants and tourists drawn from Europe, Americas and the Caribbean joining their African counterparts for the one-week fiesta.

Dr. Dede assured that security will be top on the agenda of the Rivers State Government while stressing that the 2014 edition of Carniriv, also known as the Port Harcourt Carnival, will go down in history as one of the best organised with new innovations such as the introduction of the Miss Carniriv Beauty Pageant, the launch and deployment of the biggest state-of-the-art performance stage; and increased exposure for local artists to perform on the same stage with international stars.

Dr. Dede also told journalists about the value-added marketing opportunities that companies and corporate bodies can avail themselves as participants in the carnival. “We have opened up the carnival for commercial exploitation from interested corporate bodies by packaging at lease twelve signature carnival events into stand-alone brands for category sponsorships. Each category sponsor is entitled to multiple levels of commercial and non-commercial exploitations such as publicity, speaking opportunities, branding, the distribution of company literatures/souvenirs and other levels of corporate canvassing. The carnival is also up for headline sponsorship with innumerable value propositions already lined up for the sponsoring brand,” he added.

Dr. Dede, an award winning Actor and Theatre Arts lecturer also said that a cocktail of incentives await carnival lovers this year as His Excellency, the Governor of Rivers State, Mr. Rotimi Amaechi, has insisted that the carnival is deployed as an empowerment platform for local artists and Micro, Small and Medium scale enterprises to connect with their fan base and clients alike and improve their business fortunes ahead of the Xmas and New Year seasons.

Chairman of the Board of Rivers State Tourism Development Agency, RSTDA, Deacon Vincent Erinwo, assured that the RSTDA will judiciously expend every fund released by the government for the purpose of the carnival while reiterating that the carnival is a project that is dear to the heart of the people of the state.

“We at the RSTDA, have being given a matching order not only to put the scare funds to the best use but to also seek for sponsorship and collaboration from both corporate and non-corporate organisations to make the carnival a self sustaining annual exercise in line with the vision of the state government,” he said.

Deacon Erinwo also promised that the 2014 edition of Carniriv, the Port Harcourt Carnival, which is themed as the One Love, One People edition, will be remembered for its organisation, audience management and satisfaction. “We will exceed the expectation of our guests and indigenes alike with the quality of world class performers and chart toppers that will grace our events for one week. I will urge interested carnival lovers from both far and near to make early preparations in terms of visa secure and other travel arrangements in order to witness the world-class fiesta that awaits them from the 14th to 20th of December this year,” he said.