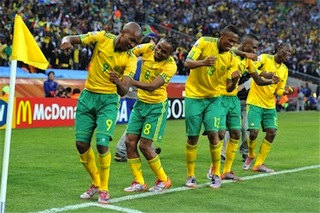 South Africa became the fourth country to qualify for the 2015 Africa Cup of Nations with an emotionally charged 2-1 win over Sudan in Durban on Saturday, Bafana Bafana’s first game since the slaying of Senzo Meyiwa.

The 27-year-old South Africa goalkeeper and captain was gunned down by an intruder at the home of his pop singer girlfriend south of Johannesburg on October 26.

Saturday’s qualifier took place in Meyiwa’s hometown and the victory allowed the Group A leaders to join already-qualified Algeria, Cape Verde and Tunisia.

Equatorial Guinea, named as hosts in place of Morocco on Friday, qualify automatically for the January 17-February 8 event.

The 2015 Cup of Nations was moved to Equatorial Guinea when Morocco were stripped of the right to hold it after insisting on the continental showcase being postponed due to the Ebola crisis.