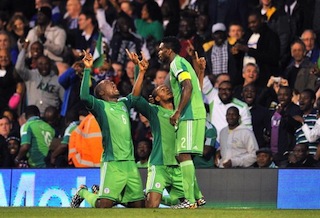 Defending champions Nigeria beat Congo Brazzaville 2-0 on Saturday to revive their bid to qualify for the 2015 Africa Cup of Nations as South Africa and Cameroon ensured their presence in the finals.

South Africa beat Sudan 2-1 in their first outing since the slaying of captain Senzo Meyiwa to top Group A, while Cameroon edged past DR Congo 1-0 to claim Group D.

On Friday, Tunisia held Botswana to a goalless draw to also advance to the finals.

Second-half goals by Ikechukwu Uche and Aaron Samuel against Congo in Pointe-Noire boosted Nigeria’s prospects of making it to Equatorial Guinea, who stepped in as hosts on Friday in place of barred Morocco.

Nigeria now have to beat group leaders South Africa in Uyo on Wednesday to ensure automatic qualification behind Bafana Bafana regardless of Congo’s result in Sudan also on Wednesday.

Villarreal striker Uche celebrated his long-awaited return to the Super Eagles in style when in the 59th minute he tucked away a penalty after Congo goalkeeper Massa fouled goal-bound Emmanuel Emenike.

Congo failed to draw level in the 65th minute, when Vincent Enyeama saved a penalty taken by Thievy Bifouma after Godfrey Oboabona handled a goal-bound shot inside his box.

Substitute Aaron Samuel then made the game safe for Nigeria a minute to full time when he struck from inside the box.

South Africa secured their ticket against Sudan in Durban to record 11 points from five matches, meaning they will now not be under pressure when they visit Nigeria on Wednesday.

Ajax midfielder Thulani Serero scored his first international goal for South Africa in the 38th minute, when he slotted home a cut-back from inside the box to give Bafana Bafana the lead.

Tokelo Rantie then doubled Bafana Bafana’s advantage in the 53rd minute, when he dribbled his way past his markers before stabbing home past the Sudan goalkeeper.

Sudan pulled a goal back through Al Hilal forward Salah Ibrahim in the 77th minute from close range.

In Kampala, Uganda pipped Black Stars of Ghana 1-0 after both teams played a 1-1 draw in Kumasi three months ago.

Uganda match winner was Savio Kabugo, who fired the Cranes ahead after just 10 minutes.

But Uganda face a daunting trip to Morocco in midweek when they battle bottom team Guinea in a final game and Ghana host Togo.

Malawi revived their hopes of qualifying for the Nations Cup after they beat Mali 2-0 at the Kamuzu Banda Stadium in Blantyre.

Second-half goals by Robert Ngambi and Kanyenda earned Malawi only their second win in the qualifying series.

The Flames now have six points from five matches, the same as Mali, with Algeria already qualified.

On Wednesday, Mali host Group winners Algeria and Malawi are away in Ethiopia.