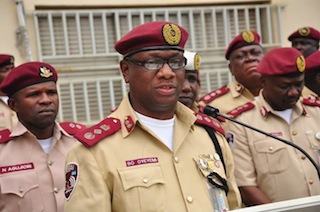 No fewer than 1,991 lives were lost to road accidents within four years in Lagos State, says the Federal Road Safety Commission (FRSC).

The state Sector Commander, Mr Hyginus Omeje, made the disclosure at an event to mark the United Nations World Day of Remembrance for Road Traffic Crash Victims on Sunday.

The third Sunday of November every year has been designated by the United Nations as World Day of Remembrance for Road Traffic Crash victims to which Nigeria is a signatory.

Omeje said that the commission as a leading agency on road safety joined the world to bring to fore the menace of road traffic crashes in Nigeria.

“This Remembrance Day is just to bring to the front burner the menace of road traffic crashes on our roads.

“What we are trying to do is to bring to the consciousness of road users the menace of these road traffic avoidable losses.

“So, there is a need for the government, individuals and all the members of NGOs to pay attention to issues that have to do with safety on our roads.

“Even in Nigeria, we have not given safety on our roads a pride of place, all roads users must be careful and avoid speeding,” Omeje said.

According to him, if a luxurious bus carrying 62 passengers crashes into a river today, it would hardly make front page news as a crash of a chartered aircraft with only 5 crew members on board.

He said that if Nigerians had given the attention it gave to Ebola Virus Disease to the daily death that arise from road crashes, the statistics of losses would have been reduced.

Omeje urged the motorists to be more proactive on issues that have to do with the safety of lives and property on the roads.

Earlier in his address, Mr Godwin Ogagaoghene, the FRSC’s Zonal Commanding Officer in charge of Ogun and Lagos States, said that all hands must be on deck to curb losses on the roads.

“We should have regards to other road users; the attitude of most road users endanger the lives of others.

“Let us put safety into consideration when we are on the road. So, let us join hands together to ensure that our roads are safe.

“World record shows that 1.3 million people die annually on the roads and 80 per cent of the people involved are from the middle and low income countries like Nigeria,” Ogagaoghene said.