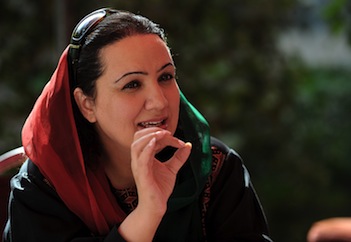 A suicide bomber on Sunday attacked the vehicle convoy of a prominent female Afghan MP near the parliament in Kabul, killing three civilians and injuring 22 others, officials said.

The blast, in which the attacker detonated an explosives-packed car, badly damaged Shukria Barakzai’s vehicle and shattered nearby windows on the main road in the west of the city.

Television footage showed a clearly shaken Barakzai walking away from her wrecked car while other passengers were covered in blood.

Barakzai is a renowned campaigner for women’s rights in Afghanistan, a stance that attracts fierce opposition from many Islamist groups and Muslim conservatives.

She has spoken about receiving regular death threats, but there was no immediate claim of responsibility for Sunday’s blast.

Shinkay Karokhil, another female MP, told AFP: “The target was a convoy of MPs who were driving toward the parliament. Shukria Barakzai was affected by the attack but she is fine.”

The blast came the day after President Ashraf Ghani completed a two-day visit to neighbouring Pakistan, which is blamed for sheltering insurgent leaders behind many of the attacks in Afghanistan.

Ghani said improved relations with Pakistan could help security in the troubled region as US-led NATO combat troops leave Afghanistan after more than a decade of fighting the Taliban.

Barakzai is a close supporter of Ghani, who has stressed the need to advance women’s rights since he came to power in September.

The president issued a statement condemning the attack as a “heinous act against all Islamic and Afghani values”.

Female officials have often been targeted by insurgents in Afghanistan.

The country’s most senior woman police officer was shot dead last year in Helmand province, months after her predecessor was also gunned down.

Female MP Fariba Ahmadi Kakar was seized at gunpoint on a highway and held hostage by the Taliban for a month last year before being freed.

Barakzai voiced strong criticism of US-led efforts last year to open peace talks with the Taliban, whom she described as “a terror network who are killing every single day Afghan civilians, women and children”.

Women’s rights have been central to the multi-billion-dollar international development effort in Afghanistan, but women still endure routine discrimination, abuse and violence.

Under the Taliban’s 1996-2001 regime, women were forced to wear the all-enveloping burqa, banned from jobs and forbidden even to leave the house without a male chaperone.