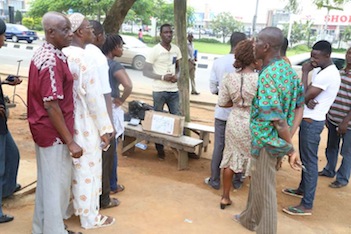 The exercise was initially billed to end Monday. Many states, where the exrecise is ongoing, have complained about the shortness of time.

According to a relase by the Commission on Sunday,which was signed by the Resident Electoral Commission,REC, Mr. Sam Olumekun, the Commission said the extension became necessary in view of the challenges arising from the exercise.

Olumekun warned citizens not to engage in multiple or double registration,hinted that such act is a punishable offence.

“In view of the challenges arising from the ongoing Continuous Voters Registration exercise in Ogun State, the Independent National Electoral Commission (INEC) wishes to inform the general public that the exercise has been extended by two (2) days, that is to say it will now end on Wednesday 19th November 2014 as against Monday 17th November 2014.

“The Resident Electoral Commissioner, Ogun State seizes this opportunity to warn citizens not to engage in double/multiple registration as it is a punishable criminal offence and such names will be deleted. Again, people whose names appear in the voter registers but could not find their cards should not re-register as their cards shall be provided in due course.

“INEC hereby assures the general public that all eligible citizens would be registered and issued valid voters’ cards before the 2015 elections,” the statement reads.

The Commissioner gave out a short code number to the general public to ascertain if a person is already a registered voter or not.

According to him, the State,surname and last five digits of the Voters Identification No,(VIN) on the temporary voters cards would be sent to a short code or a given telephone number for confirmation.