IS claims beheading of US aid worker Kassig 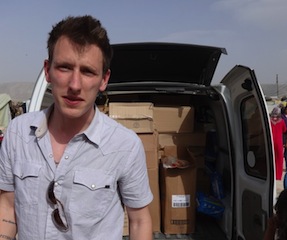 The Islamic State group on Sunday released a video claiming the beheading of US aid worker Peter Kassig in a warning to Washington as it prepares to send more troops to Iraq.

The video also showed the gruesome simultaneous beheadings of at least 18 men described as Syrian military personnel, the latest in a series of mass executions and other atrocities carried out by IS in Syria and Iraq.

Washington said it was working to confirm the authenticity of the video, which sparked widespread condemnation.

“If confirmed, we are appalled by the brutal murder of an innocent American aid worker and we express our deepest condolences to his family and friends,” National Security Council spokeswoman Bernadette Mehan said.

In the undated video, a man who appears to be the same British-accented jihadist who beheaded previous Western hostages stands above a severed head.

“This is Peter Edward Kassig, a US citizen,” the black-clad masked executioner says, urging US President Barack Obama to send more troops back to the region to confront IS.

“Here we are burying the first American crusader in Dabiq, eagerly waiting for the remainder of your armies to arrive,” the militant says, referring to a northern Syrian town.

Kassig’s family said they were awaiting official confirmation on the death of the former US soldier, who risked his life to provide medical treatment and aid to those suffering from Syria’s civil war.

“We are aware of the news reports being circulated about our treasured son and are waiting for confirmation from the government as to the authenticity of these reports,” Ed and Paula Kassig said in a statement.

They urged the media not to publish or broadcast images released by IS, saying this was “playing into the hostage-takers’ hands”.

“We prefer our son is written about and remembered for his important work and the love he shared with friends and family, not in the manner the hostage-takers would use to manipulate Americans and further their cause.”

Kassig would be the fifth Western hostage killed by IS in recent months, after two US reporters and two British aid workers were beheaded.

Sunday’s video was substantially different from the previous IS recordings. Kassig was not shown alive in the footage, and no direct threats were made against other Western hostages.

British Prime Minister David Cameron said he was “horrified” by the “cold-blooded murder” which French President Francois Hollande called a “crime against humanity”.

The 26-year-old, who converted to Islam and took the first name Abdul-Rahman, was captured last year and was threatened in an October 3 video showing the beheading of British aid worker Alan Henning.

The claim of Kassig’s killing came as Washington prepares to double its military personnel in Iraq to up to 3,100 as part of the international campaign it heads against IS.

The Sunni Muslim extremist group has seized large parts of Iraq and Syria, declared a “caliphate” and imposed its brutal interpretation of Islamic law.

The latest video also showed a highly choreographed sequence of the beheadings of at least 18 prisoners said to be Syrian officers and pilots loyal to President Bashar al-Assad.

Jihadists are shown marching the prisoners past a wooden box of long military knives, each taking one as he passed, then forcing them to kneel in a line and decapitating them.

“Today, we’re slaughtering the soldiers of Bashar,” the same black-clad militant said in the video.

“Tomorrow, we’ll be slaughtering your (US) soldiers. And with Allah’s permission, we will break this final and last crusade, and the Islamic State will… begin to slaughter your people on your streets.”

Kassig founded an aid group through which he trained some 150 civilians to provide medical aid to people in Syria. His group also gave food, cooking supplies, clothing and medicine to the needy.

Burhan Mousa Agha, a Syrian friend who worked with Kassig in Lebanon, described him as a funny, dedicated and brave man who only wanted to help those who had suffered from the war.

“I want to apologise to his family. I don’t know what to tell his mother and father, I’m sorry that their son died in my country, trying to help,” Agha told AFP.

“They are animals, less than animals, they don’t represent Islam. Peter wasn’t fighting anyone, he was teaching people how to save lives.”

The Syrian Observatory for Human Rights monitor said IS also executed 13 men in Raqa in Syria, accusing them of belonging to pro-regime sleeper cells.