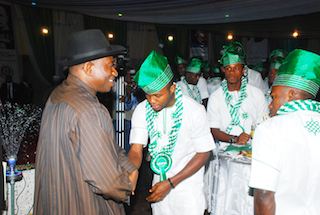 President Goodluck Jonathan has congratulated the Super Eagles on their victory over the Red Devils of Congo in Pointe Noire on Saturday, describing it as “dogged and hard-fought”.

NAN reports that the Eagles defeated their Congolese rivals 2-0 to revive the country’s hope of qualifying for 2015 African Nations Cup Finals.

Jonathan, in a statement by his Special Adviser on Media and Publicity, Dr Reuben Abati, applauded the Super Eagles’ “patriotic, determined and courageous display in front of a vociferous and partisan home crowd”.

The victory, he said, had placed Nigeria in good stead for qualification to defend the African Nations Cup, which it currently holds, at next year’s finals, to be hosted by Equatorial Guinea.

“On behalf of all soccer loving Nigerians, the president heartily commends the Super Eagles for their winning performance in Pointe-Noire.

“The victory has wiped away the disappointment of their earlier outings in the qualifying series and rekindled the hope of Nigerians in the team’s ability to bring further glory to the country.

“Jonathan joins other Nigerians in looking forward to seeing the Super Eagles complete the task of qualifying to defend the title at the 2015 Nations Cup Finals with victory against South Africa in Uyo, next week.

“He assures the Super Eagles and their handlers of the fullest support of the Federal Government and the people of Nigeria for that final qualification match,” the statement said.