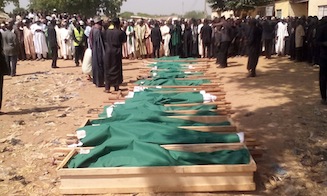 File Photo: Shiite community members gather on November 4, 2014 for funeral rites of members killed on November 3 during a procession at a Shiite festival in Potiskum, Yobe state

The military, Police and State Security Services in Yobe on Sunday stressed the need to install Close Circuit Television (CCTV) cameras to monitor movements in schools.

Malam Wakil Kaku, the National Orientation Agency (NOA) state Director, disclosed this in an interview with NAN in Damaturu.

“The military, Police and State Security Services authorities noted that all schools must be provided with wall fence and installation of close circuit Television (CCTV) cameras to monitor movements and objects in and around the schools.

“The security authorities also emphasised on the need to provide designated entry and exit points to check unauthorised movements around the schools,” he said.

Kaku, however, said that the agency had sensitised schools Principals and proprietors to understand basic precautionary measures on security challenges.

He said the agency was worried about the spate of attacks on schools claiming lives of innocent students.

“We saw the need to sensitise school authorities to basic measures towards securing the schools.

“The agency last week organised intensive training on precautionary measures on security challenges for school principals and proprietors across the state,” the director said.

Kaku said the authorities were educated on the need to promote self-screening to identify new faces among students and teachers in order to fish out strange faces with nefarious intentions.

“The school authorities should also check visitation during school hours or when picking students after school closure,” he said.

The director, therefore, advised authorities to be mindful of structures erected around the schools, saying these structures could be security risks.