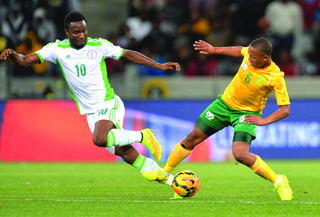 Members of the Super Eagles have vowed to defeat Bafana Bafana of South Africa when both teams clash in their last Group A match of the Africa Cup of Nations qualifying series scheduled for Wednesday at the new Akwa Ibom International Stadium, Uyo.

Nigeria have the same seven points with Congo in the group and a victory for the Eagles against their arch rivals, South Africa on Wednesday will earn them a place in next year’s Nations Cup scheduled for Equatorial Guinea.

Sone Aluko of Hull City said he and his colleagues are ready to take South Africa to the cleaners. He said their victory against Congo last weekend will propel them to go for victory come Wednesday in Uyo.

“Amazing atmosphere though tear-gas aside, I love every second. They were hurt. Nothing like winning! Bring on another battle on Wednesday,” Aluko twitted.

In his own comment, Eagles’ defender, Elderson Echiejile, boasted that they will be gunning for victory when they take on South Africa in their last group match.

“Good win today (Saturday) we need to get the job done at home,” Echiejile posted on his twitter account after the victory against Congo.

Eagles Coach, Stephen Keshi expressed confidence that his team will come out victorious against South Africa.

Keshi, who is aware that only victory against South Africa will guarantee his team a place in next year’s African Nations Cup, said his players are in high spirits and they are ready to do the country proud.

Meanwhile, the Eagles have been boosted by the return to training of injured defenders Kenneth Omeruo and Azubuike Egwuekwe.

Team spokesman Ben Alaiya disclosed that: “Both Omeruo and Egwuekwe resumed training with the rest of the squad in Uyo.”

Omeruo is nursing groin and knee complaints and as such was ruled out of Saturday’s clash against Congo in Pointe-Noire.

Egwuekwe, who stood in for the injured Omeruo, suffered a head gash after leaping for an aerial ball.

The Eagles resumed training in Uyo on Sunday.

Wednesday’s match will kick off by 5pm Nigerian time at the Akwa Ibom International Stadium a.k.a. ‘The Nest of Champions’.