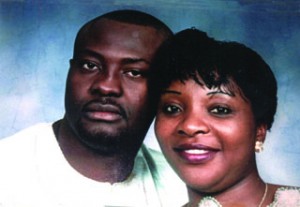 •Blessing and her ex-husband Okpoko

A jilted husband, Ifeanyi Kenneth Okpoko, has written to Bishop David Oyedepo, Founder and General Overseer, Winners Chapel, asking him to tell one of his pastors, Rev. Kelvin Ugwuoke to leave his banker wife, Blessing for him.

P.M.NEWS had last Thursday reported the divorce case between Okpoko and Blessing. The issue took another dimension when on the same day the news was published, Okpoko wrote to Oyedepo to prevail on his pastor to leave his wife alone.

In a letter dated 13 November, 2014 titled Case of Adultery, Snatching of my Wife and Secret Marriage Engagement, Okpoko alleged that Ugwuoke snatched his wife Blessing, who is an area manager in an old generation bank, took her  to Dubai and allegedly wedded her secretly.

Okpoko said he legally married Blessing according to marriage act and when he later discovered she had married Ugwuoke, also a banker, in Dubai and confronted her with some photographs, she moved to Ugwuoke’s home at Prime Water View Estate, Flat 8 in Lekki.

He said Blessing also filed a suit at a Lagos High Court seeking for the dissolution of the marriage to cover up her adultery.

He said Blessing and Ugwuoke have been harassing him with police, and at a point, he was sent to prison in order to take over their joint property.

Okpoko stated that both Ugwuoke and Blessing are devoted ministers in Winners Chapel, noting that before she packed out of his house, she was a pastor in charge of House Fellowship in his house at Ajao Estate in Lagos.

Okpoko stated in the letter that Ugwuoke and Blessing were lovers in Kano before Ugwuoke dumped her to marry other women.

He said he married Blessing in 2001, adding that the marriage broke up in April 2013 when Blessing lied to him that she was going to Dubai for her banking job only for Ugwuoke to wed her secretly there.

Okpoko said when she returned from Dubai, her behaviour totally changed, as she started picking quarrels all the time until information about the marriage and photographs got to him.

He added in the letter to Oyedepo: “Sir I have been subjected to mental and psychological trauma just to force me to untimely death. Ironically, they are ministers in your church which calls for your intervention.”

He also attached photographs taken by Ugwuoke and Blessing both here in Nigeria and Dubai.

Earlier, Blessing declined to speak with our reporter about the matter, insisting nobody can tell her how to live her life.