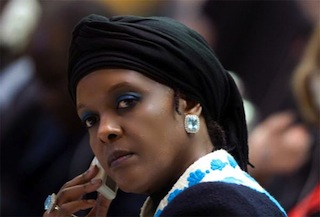 Zimbabwe leader, Robert Mugabe’s wife, Grace, is about to be the world’s first female dictator as she plots to take over power from her 90-year-old husband.

Grace Mugabe has been called many things since the moment when, barely out of her teens, she caught the eye of the president of Zimbabwe as she tapped away in his typing pool, reports the Daily Mail.

Now his wife, she styles herself ‘Amai’ (mother) for her supporters but, behind her back, is derided as Gucci Grace and The First Shopper, a reflection of her extravagant spending in designer shops around the world despite the struggles of her country.

Others simply call her Dis Grace, especially those who believe she forced her 90-year-old husband Robert to remain in power so she could plunder Zimbabwe’s diamond wealth to fund her overseas shopping trips. But now a nervous nation fears she could soon have a new title: President.

For this reviled woman has stepped, in her costly Ferragamo shoes, into the political arena, exploding a titanic power struggle to succeed the increasingly doddery despot who has ruled Zimbabwe so disastrously for more than three decades.

Many Zimbabweans believe she wants the top job, which would make her the first female dictator in modern history.

The 49-year-old has stoked such fears by touring the country by helicopter, holding mass rallies and pouring scorn on her rivals.

“The time has come to show people what I am made of,” she told one crowd.

“I had never dreamed of entering politics but you have approached me and I am ready to go.”

At another rally a few weeks later, the South African-born first lady said: “Some say I want to be president. Why not? Am I not Zimbabwean too?”

Most of her fellow citizens see this as a chilling prospect that threatens to plunge their beautiful but tormented country into fresh despair.

Grace Mugabe is, quite simply, loathed. “She is an avaricious monster with a vindictive nature, who makes Imelda Marcos look mild by comparison,” one close observer said.

“Every time she speaks she creates lots of new enemies, just hitting out regardless of the consequences,” said another well-connected figure in the capital Harare.

“I find her very cruel and spiteful, unlike her husband.”

This is a woman who personally threw an elderly white couple off their family farm, punched a British photographer in the face after he snapped her on a shopping spree and claimed to have cursed a South African critic of her husband who committed suicide.

Diplomats believe she is stealing vast chunks of the nation’s wealth from diamond mines. She blew £3million of state funds on her daughter’s wedding earlier this year and defends wearing her Italian designer shoes while people starve on the basis that she has “narrow feet”.

Suddenly the public buses in Harare are bearing huge images of her hated face. She has been given a doctorate in sociology after a two months of supposed study and ministers are gushing about the “guidance and leadership” of a woman “who is a mother to us all”.

And this is the question at the heart of the power struggle: who will take over from the cold, calculating man who has clung on to power in Zimbabwe since it won independence from Britain in 1980, overseeing the slaughter of rivals, the shocking collapse of the economy and the shameful theft of its mineral wealth?

Her jibes were supported by screaming headlines in official newspapers, one accusing Mujuru of conspiring with the CIA to depose the president at next month’s congress. The vice-president has stayed silent. Meanwhile there was a spate of suspicious deaths and severe injuries to senior regime officials, while businesses say they are being forced to take sides, with potentially dire consequences if they make the wrong choice.

If Mugabe’s wife were to inherit his throne it would be a remarkable rise to power for the former secretary, who began an affair with the president as his popular first wife Sally lay dying of cancer. Their only child died aged three of cerebral malaria.

“It might have appeared to some as cruel,’ Mugabe said last year. ‘My mother has all the time said: “Ah, am I going to die without seeing grandchildren?” So I decided to make love to her [Grace].” They married in 1996.

Twelve years ago she turned up with armed enforcers at the home of a septuagenarian couple who owned a stunning 2,500-acre estate. “I’m taking over this farm,” she told them, warning they had 48 hours to leave or face arrest. Since then Grace has built up a farming empire of thousands more acres of prime agricultural land, and launched a dairy range. “If she wants something, she just tells people she is taking it,” said one diplomatic source.

Last year, she claimed she had to expand a small orphanage near Harare and took 4,000 acres of a company-owned estate, leaving 50 families homeless and costing the firm nearly £4 million. She added another 2,100 acres this year, claiming to have found the land lying idle. Local sources say she wants further expansion.

Public distaste over her profligate spending grew as the economy slid into crisis after the farm seizures. She spent hefty sums on shopping trips in London, Paris and Singapore, where she was photographed with 15 trolleys overflowing with luggage at the airport. The Mugabes make regular visits to Singapore, where the president receives treatment for rumoured prostrate cancer while his wife hits the shops.

She is renowned for her fiery temper, most infamously displayed five years ago. As her nation was ripped apart by the second worst hyper-inflation in history, she was seen on a shopping spree in Hong Kong by British photographer Richard Jones and responded by attacking him.

“She was completely deranged,” said Mr Jones afterwards. His face was cut by her diamond rings after she hit him several times. She claimed diplomatic immunity to escape charges.

A legal battle earlier this year appeared to confirm reports the Mugabes had bought a £4 million luxury bolt-hole in Hong Kong. Funding for these homes, her colourful designer clothes and accessories such as Cavalli sunglasses, comes from the fabled Marange diamond mines in eastern Zimbabwe. Few profits dribble through to the state, which struggles to pay public sector salaries.

The WikiLeaks website revealed a former US ambassador identified her among a small group of high-ranking officials ‘extracting tremendous diamond profits’ from these mines.

Zimbabwe’s stolen diamonds are sold through a Hong Kong dealer and the proceeds often spent on arms.

Zimbabwe is now waiting and watching for its first lady’s next move. “This is clearly a political power play motivated primarily by the Mugabes’ desire to hold on to the massive amounts of personal wealth they’ve accumulated in power,” said Jeffrey Smith, a Washington-based analyst.

“It is self-interested politics buttressed by a dangerously inflated ego after speaking to large and boisterous crowds during her nationwide tour.”

Grace even seems to believe she has supernatural powers now. Referring to the death of Heidi Holland, author of an acclaimed book about Mugabe, she told one rally:  “There was a white lady who wrote a book castigating President Robert Mugabe. I held the book and prayed to God to deal with her. She committed suicide a month later.”

The big question is whether this despised woman can survive the deadly bear pit of Zanu-PF politics – or if she is just a pawn being used by other powerful players.

“She is portrayed as a smart businesswoman but everything she presides over is looted – although she is certainly an expert at retail therapy,” said one authoritative source.

“She is an under-educated woman who does not realise the fire she is playing with. She’s the sort of person who will end up hanging from a lamp-post like Mussolini’s mistress.”

Only time will tell if such gruesome fate awaits Grace Mugabe. Or whether she ends up as the modern world’s first female dictator, an alarming prospect for a land that has suffered so much and for so long under her husband.