Oshiomhole accuses PDP of importing mercenaries to register in Edo 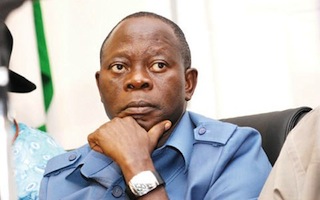 The Peoples Democratic Party, PDP, Edo State chapter, has been accused of importing mercenaries to register in their wards to boost their numbers for the forthcoming elections in the state.

The state governor, Adams Oshiomhole, who made the accusation while speaking on Monday after monitoring the ongoing Continuous Voter’s Registration exercise at Ward 10, Iyamho, Etsako Central Local Government Area of the state, alleged that bus-loads of mercenaries were imported into the state and were given cover by suspected soldiers.

“I have heard that some politicians are bringing in people from neighbouring states and I find that very strange. I was told that somewhere in Uromi, a PDP Leader brought in soldiers to provide escort while they brought in people with buses from neighbouring states to register in one of the wards in Uromi and I find that very worrisome because the whole idea is not to import mercenary voters.

“The whole idea was to give an opportunity to those who didn’t register before now. I can understand if someone who is resident outside his village wants to go back to the village for the purpose of election but the villagers know everybody. So, when you now import people who are not from the village and register them, that distorts the numbers and creates problems. It creates problem for the electoral system.

“I want to appeal strongly to INEC to have a way of monitoring the exercise to ensure that there are no mercenary voters. In Uromi, the leaders protested when the politician brought the mercenaries to register, but because of the soldiers that were escorting them, they had to leave. And these people were brought in with several buses, they were brought in buses owned by a popular transport company. This is very disturbing and I hope that INEC will check these kind of malpractices,” Oshiomhole said.

The governor also added that the time allotted for the Continuous Voters Registration (CVR) exercise in Edo was inadequate due to the large number of people who still wish to register and the allocation of one Direct Data Capture Machine per ward to cater for the large numbers.

“There are lots of people who cannot register because of logistic problems. In many wards, the machines were not available on the first day and the second day and it took time apparently for INEC to prepare a lot of the machines before putting them to the various wards.

“As you can see for variety of reasons, there are lots of people who wish to register but could not because INEC does not have enough Data Capture Machines particularly in the first two days or so”.

According to the governor, “What is encouraging is that many people want to register which for me is a positive sign because it means people recognize the need to have this power; the power to hire and fire politicians and that is the most potent power in the hand of the very ordinary people and it is the only instrument that equalizes every Nigerian. Whether you are big or small, rich or poor, employed or unemployed, on election day, it is one man one vote, everybody is equal.

“The people want to register but because of logistics challenges, INEC is not able to cope with the people turning up. All of us must play our part to raise awareness and encourage our people to take advantage of this exercise so that they can retain their power to hire, to fire and to discipline politicians who they empower with their voter’s card.”