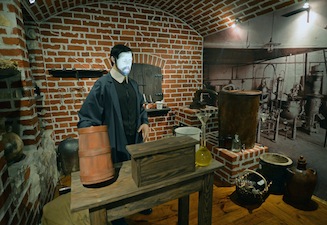 The smell of money hangs thick in the air as black crude oil bubbles up from what is billed as the world’s oldest oil well, but this is not Texas or Saudi Arabia.

The sleepy village of Bobrka in southern Poland lays claim to the planet’s first oil well and rig, one that is still pumping up enough black gold to be profitable.

It was dug and built by hand in 1860 under the watchful gaze of Polish pharmacist and inventor Ignacy Lukasiewicz, a humble man who pioneered the now ubiquitous use of petroleum by creating the kerosene lamp.

Thanks to him, “Bobrka became the birthplace of the world’s oil industry”, says Barbara Olejarz, who runs a local museum devoted to the origins of the sector and whose last name by coincidence means “oilman” in Polish.

“It all began there,” she tells AFP while pointing a finger at an obelisk built by Lukasiewicz and his circle to mark the launch of the oil field in 1854 and the founding of the world’s first oil company.

Despite giving birth to the sector, it turned out that Poland did not have much oil.

It now produces around 20,000 barrels a day, or 7.3 million per year, worth some $584 million (466 million euros) at current prices — a trickle by global standards. Refined locally, Polish crude covers just four to five percent of domestic demand, according to oil and gas expert Andrzej Szczesniak.

The five remaining wells at the Bobkra museum pump out a combined 423 barrels of crude per year, which is also locally refined and consumed.

And though he pioneered the oil industry, few outside the country know about Lukasiewicz, due in part to his own humility.

“His modesty worked against him. He remained less known than other Polish scientists: Copernicus or Marie Sklodowska-Curie,” says Olejarz.

“He didn’t want to be the talk of the town, he didn’t like to stand out, he did everything during his lifetime so that he’d be forgotten and his wish has been fulfilled.”

Born in 1822 in the southern village of Zaduszniki — then part of the Austro-Hungarian Empire — Lukasiewicz acquired a pharmacist’s diploma and an interest in the petroleum found in the eastern Carpathian Mountains.

He ran experiment after experiment, sometimes triggering an accidental fire or explosion, before succeeding at refining crude oil and inventing the first kerosene lamp.

In 1853, he used it to light up the hospital in nearby Lviv, now part of Ukraine, and the following year he lit the world’s first kerosene lamp on a street in Gorlice.

Next up came the need to learn how to extract fuel from the ground in high volumes.

“In Bobrka, the first drillers were actually well-diggers who dug holes with pickaxes, shovels and hammers. The work was hard and dangerous,” says Olejarz, citing hazards including cave-ins, flooding and gas leaks.

She spoke in front of the wooden tripod that surrounds the Franek well, which is equipped with a cable pulley for pulling up buckets of oil.

By 1874, the Austro-Hungarian Empire had identified 111 wells and drilling sites in Bobrka. The deepest well went down 150 metres (490 feet).

The wells would be extended later thanks to new drilling technology, much of which was developed in the United States.

“Some say that one of the Rockefellers either came here himself or sent his associates to seek advice on how to obtain kerosene from crude oil,” says Olejarz, referring to the wealthy US family behind the company that became energy giant ExxonMobil.

“And Lukasiewicz told them everything.”

When the Rockefellers asked how much they owed him for the advice, he was said to have replied that it was free because he was working for the good of humanity — not for money.

“He was particularly modest, the archetypal nice guy, someone with passion,” says Joanna Kubit, principal of the petrochemical technical high school in the nearby town of Krosno.

“His idea was that the oil industry should above all serve to improve life in this poor province of Galicia,” the name of the region when it was an impoverished part of the Austro-Hungarian empire.

Sure enough, she says, the life of the region’s residents changed with the income generated by the sector and the considerable sums their wealthiest resident spent on public utility projects.

“It was said at the time that every road in Galicia was paved with Lukasiewicz’s money.