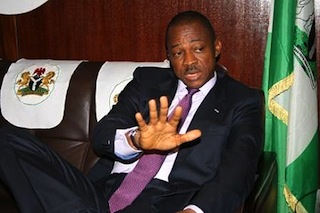 Gov. Sullivan Chime of Enugu State said on Tuesday that the PDP congresses in the state were “totally unacceptable” to its members and the people of the state.

Chime made the declaration at a PDP stakeholders meeting in Enugu on Tuesday, saying the congresses were not subjected to the will of the people of the state.

On the current crisis rocking the party in the state, the governor said it was a result of contrary decisions by some members of the party.

He said that going out of the PDP was the easiest way to retire from politics and that anyone fighting the party either within or without would have to exit the party.

“We are not used to what they did and called congresses. In Enugu State, the proper thing should be done; I do not have any personal struggle with anybody.

“I believe it is a collective decision that in Enugu State, we should be allowed to choose our leaders.

“I want the people to respect decisions. Anybody trying to go contrary to our decisions is on his own. People who want to benefit from the PDP must learn to be compliant. We have abandoned the policy of god-fatherism and imposition.

“It is true that I have been in prison but it has given me the opportunity to touch the lives of our people. The prison will soon end,” he said.

The governor said the collective decision was in line with the party’s constitution, adding that the constitution of the party recognises zoning and rotation.

Chime said the party had been preparing for its forthcoming primaries in the state to elect its candidates and commence political rallies in various local government areas.

The governor called on the aggrieved members of the party to come together to build a peaceful family in the state.

Also speaking at the meeting, the former Chairman of the party in the state, Chief Vita Abba, thanked its members for their support during his tenure.

Abba urged the loyalists to remain committed and focused to make the party successful. “I encourage you to remain focused because there is light at the end of the tunnel,” he said.