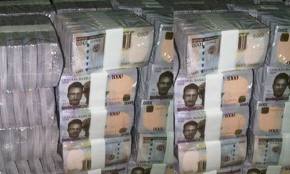 Nigeria’s naira closed at a new low of 173.20 against the dollar on Monday, down 1.21 percent in volatile trades, despite central bank intervention to prop up the currency, dealers said.

The regulator asked lenders to bid for $2 million each in a move to shore up the local currency, but commercial banks avoided the forex auction as the central bank was restricting the re-sale margins to curb speculation.

Nigeria’s foreign exchange reserves fell 3 percent in two weeks to $37.59 billion by November 13, as the Central Bank stepped up support for the ailing naira currency.

Data published by the Central Bank on Monday showed the reserves were at $38.76 billion on October 29.

The bank has spent billions of dollars defending the naira, hit by falling global oil prices, in the past month.