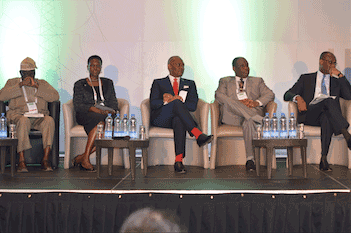 ‎Africa’s business leader and Chairman of Heirs Holdings, Tony Elumelu, said on Tuesday that Nigeria’s power transmission company is grossly inefficient and should be privatised.

The company loses an average of 40 per cent of power generated every day, Elumelu said citing the example of the Ughelli Power Plant.

He was speaking at the eleventh edition of the West African Power Industry Convention, WAPIC, holding in Lagos, western Nigeria.

In the case of the Ughelli Power Plant, he said, it operated at full capacity in July, generating 100 megawatts daily.

But because of the outdated transmission systems, for every 100MW generated and sent to ‎the transmission company, 40 per cent is lost, he said.

He listed the limited availability of gas as the second biggest problem undermining power generation business in Nigeria.

“Many plants in the country can produce more than they currently do, but limited availability ‎of gas makes it difficult to produce according the companies’ individual ‎capacities,” he said.

The third biggest problem, he added, is the inability of the Federal Government to pay power generating companies in timely manner.

This could slow down investments and discourage investors, he said.

Though he admitted that the Federal Government is addressing some of the issues, he called for the right regulations to be put in place.

‎He argued that Nigeria cannot develop without addressing its power problems, and explained that the private sector can drive the needed growth.

As he spoke, a power cut triggered a big laughter in the audience.

Nigeria’s Minister of Power, Prof. Chinedu Nebo, who declared the convention open, said ‎the meeting is timely as it is the first of its kind in the post privatisation period in the country.

That privatisation exercise, the Minister said, has been adjudged globally as being ambitious and transparent.

He recalled that before the administration of President Goodluck Jonathan, the power infrastructure was in a state of inadequate maintenance and poor funding which created a wide gap between demand and supply of electricity.

“During this period, it was impossible to attract investment into many other sectors of the economy and worst of all private investors to participate in any power sector activities because of low Returns on Investment (ROI),” Nebo said.

‎But things have changed and the power sector is attracting investors, the Minister said.

He said the power sector in West Africa needs an estimated investment of $25 billion within the next 10 years in order to have an efficient, reliable and consistent power supply to the market.

He called on investors to make the needed investment in West Africa, saying that the African economy has tripled in its growth in the last 14 years.

“The International monetary Fund (IMF) has also made the forecast that 11 of the world’s 20 fastest growing economies will be in Africa by the year 2017,” Nebo said.

Governor Babatunde Fashola who sent a goodwill message read at the convention said his government is thrilled that WAPIC 2014 is ‎being held in Lagos.

“As a city, we are happy to have the infrastructure to support this ambitious and laudable event,” the governor said.

“As you visit groundbreaking projects scheduled as part of this event such as Eko Atlantic City and the Island Independent Power Project, we hope you are moved by the spirit of Lagos and it’s achievements, ” Fashola said.

Fashola mentioned his power development agenda initiated in 2010 with the implementation of the dedicated IPP for water supply located in Akute, the creation of the Ministry of Energy and Mineral resources in July 2011‎ and the existence of the Lagos State Electricity Board.

“Within the last four years, the board has implemented over 40MW of embedded independent power generation and has installed over 400 km of well-maintained streetlights across the city,” Fashola said without acknowledging that most of the streetlights have not been working for more than two years.

Prof. Thomas Akabzaa, Chief Director, Ministry of Energy and Petroleum Ghana disclosed that with a population of 24 million people, Ghana currently produces 3000 megawatts of electricity and is expecting to produce 5000 megawatts by 2016. He said 76 per cent of households in Ghana have access to electricity.

He refused to compare Nigeria, which produces 3500 megawatts of electricity with a population of 170 million to Ghana, saying only that the gas Nigeria supplies to Ghana to generate electricity does not always come.

“Its products and solutions currently serve more than 160 electric power companies around the world, ” Liang said of Huawei.

The eleventh edition of WAPIC, which will end on Wednesday, has about 70 exhibitors‎, said Lida van Heerden, a marketing specialist at Spintelligent, the company organising the event.

She ‎said over a thousand people had registered to visit the event while over 390 delegates would attend the event.