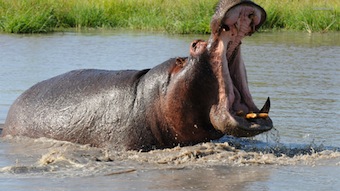 Twelve children and a villager have been confirmed dead after a hippopotamus attacked a boat near the Niger capital Niamey earlier this week, officials said Wednesday.

The students, aged 12 to 13, died when their boat transporting them across the Niger River was flipped by a hippo on Monday. A number of students in the West African nation take such boats to attend school on the other side of the river.

“Ultimately it was 12 students, including seven girls and five boys, who died after the attack,” Aichatou Oumani, minister of secondary education, told state television.

A villager on the same boat was also killed, according to an official in Libore, the village near the site of the accident.

An earlier toll had spoken of two deaths, 11 missing and five survivors. At least 18 people were aboard the boat, mostly students.

“We have already given the order for the animal to be identified and killed,” Hassoumi Djabirou, governor of the Tillaberi region, said on local television.

Game wardens shot dead a hippo last year after it killed a teenager in Niamey.

Hippos with young in tow are the most aggressive, even attacking cattle that come to graze on the banks of the Niger River, experts say.