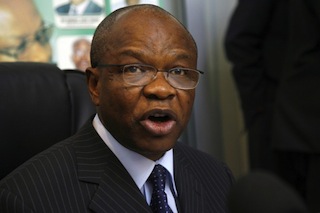 Iwu spoke at the Real News Second Anniversary Lecture and Presentation of Paragon of Journalism held at Sheraton Hotel, Lagos.

He said that for the elections to be successful, it was imperative that the menace of violence in the electoral process be addressed effectively.

“Violence in its various forms and manifestations negate the spirit and principles of democracy.

“There is hardly any room for the two – democracy and violence – to thrive simultaneously,” he said.

The former chairman of INEC said that reducing the pervasive influence of money in politics and elections would also create conducive voting environment for voters.

Iwu said that correcting the mindset of Nigerians on elections, promoting internal democracy in political parties and enhancing women participation in elections would help strengthen democracy in the county.

“It is important that Nigerians appreciate the link between these retarding factors and the impairment of their electoral process.

“These factors are intertwined and often engender numerous other problems which make the conduct of elections in the African setting a complex undertaking,” he said.

Iwu, who said 2015 elections, had their own peculiarities, called for unity and patriotism of Nigerians and political players, urging all to work together to preserve the nation’s democracy.

He said that the forthcoming general elections were an opportunity to consolidate on the gains of democracy made since 1999.

NAN reports that Iwu congratulated the Publisher of RealNews Magazine, Maureen Chigbo, and her staff on the second anniversary of the on-line magazine.

He expressed optimism that the magazine would wax stronger in the coming years.