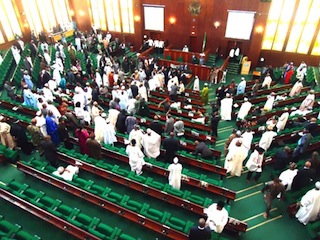 There was anxiety Tuesday night among members of Nigeria’s House of Representatives as the lawmakers are set to reconvene on Wednesday to consider a request by President Goodluck Jonathan to extend emergency rule in Borno, Adamawa and Yobe States, states mostly affected by the deadly Boko Haram insurgency.

“On Tuesday, 18th November 2014, I received a communication from the President, Commander-in- Chief of the Armed Forces, Dr. Goodluck Ebele Jonathan GCFR, requesting for the extension of the existing State of Emergency in Adamawa, Borno and Yobe States by the House of Representatives,” Tambuwal said in a statement while announcing the reconvening of the House.

“Pursuant to the powers conferred on me by Section 305 (2) of the Constitution of the Federal Republic of Nigeria 1999, which requires me to “forthwith convene or arrange a meeting of the House” and in order to treat the extension before the expiration of the current State of Emergency in accordance with Section 305 (6) (c) of the Constitution, I hereby reconvene the House of Representatives…,” he added.

The House had adjourned on 28 October immediately after Honourable Aminu Tambuwal, the Speaker announced his defection to the opposition All Progressives Congress from the ruling Peoples Democratic Party.

The House was scheduled to resume on 3 December and it was believed that the long adjournment was to avoid potential backlash over the defection from majority PDP members of the House.

Members of PDP led by President Goodluck Jonathan and Adamu Mu’azu, the chairman of the party had met with PDP caucus of the House after the defection on the possibility of removing Tambuwal from office as a punishment for the defection.

The Speaker whose security details have been withdrawn by the Police Chief following the defection has filed a suit to stop his removal by the PDP caucus of the House led by Deputy Speaker, Emeka Ihedioha.

Still members of the House are anxious over speculations that the Presidency which is still smarting from the defection of the Speaker may employ extra constitutional means to stop Tambuwal from presiding when the House reconvenes on Wednesday.

President Jonathan met with the the Senate President and the Deputy Speaker behind closed doors at the Aso Rock presidential villa on Tuesday.

Though both men refused to speak to the press after the meeting, it was believed that the issue of the state of emergency as well as the defection of the Speaker were the main topics of the meeting.

In another development, Tambuwal has announced his abandonment of a bid to contest for the presidential ticket of the All Progressives Congress. He will now face his original plan to run for the governorship seat in Sokoto state, his home state.