Burkina army holds on to power as Zida is named PM 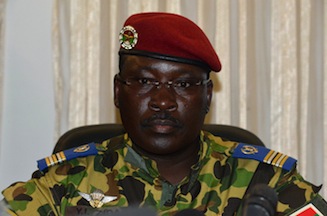 The army officer who took power after the fall of Burkina Faso’s president was Wednesday named prime minister, ensuring the military keeps a grip on government despite pressure for a civilian transition.

While interim president Michel Kafando, a former foreign minister, is a civilian, Zida’s appointment as head of his government showed the military had no immediate plans to retreat from a role in running the west African nation.

In the immediate aftermath of Compaore’s fall, Zida, then second-in-command of the presidential guard, was installed in what appeared to be a military power grab. The country faced international pressure to quickly transition to civilian rule.

Zida on Wednesday urged the people of Burkina Faso and the international community “to accompany us without prejudice” on the path to a peaceful transition, insisting the government would make no “selfish calculations”.

The appointment of the 49-year-old was agreed between politicians and army leaders, according to a senior military officer.

“It was on this understanding that we gave the post of president… to civilians,” the officer said.

Some civil society representatives said they were concerned over Zida’s appointment, but were willing to be patient and monitor his performance.

“We are worried, but that’s all,” said Guy Herve Kam, spokesman for the Balai Citoyen (Citizen Broom) group, whose mobilisation of young protesters contributed to Compaore’s fall.

A number of residents of the capital Ouagadougou however were sharply critical, calling the appointment a betrayal of their “revolution”.

Zida’s moves while in power have included suspending local and regional councils and sacking two heads of state firms for alleged sabotage.

Kafando, a 72-year-old veteran diplomat, was sworn in as Burkina Faso’s interim president on Tuesday to oversee a year-long transition to civilian rule after the turbulent ouster of Compaore’s regime on October 31.

The one-time foreign minister and UN ambassador has pledged he would not let the landlocked nation of 17 million people become a “banana republic”.

Poised to formally take over Friday from the interim military regime, Kafando emphasised his “humility” as a leader aware that he temporarily held “power that belongs to the people”.

Mass unrest erupted in late October over Compaore’s bid to change the constitution, which would have allowed him to extend his 27-year rule of the former French colony.

Kafando was chosen to head the transition after tortuous negotiations between the military, political parties and civil society groups.

Both Kafando and Zida are barred from standing in elections scheduled to be held in November next year under the transition deal.

The African Union had warned that the deeply poor country would face sanctions unless it chose an interim leader, and it welcomed Kafando’s appointment.

But the decision to hand power to a man closely associated with the former regime raised suspicions for many.

“Compaore said for 27 years that he was not thirsty for power, yet he remained firmly in his job,” said Amadou Sawadogo, a 37-year-old street seller.

The transition will include a 25-member government, and a civilian will also head a 90-seat parliament, known as the National Transitional Council.

During the uprising against Compaore, protesters set the parliament building ablaze and attacked other official premises in the capital and other cities in violence not seen since a wave of army mutinies in 2011.

Burkina Faso notably exports cotton and gold, but almost half the population lives on less than one dollar a day and many are subsistence farmers.

Compaore was 36 when he seized power in a 1987 coup in which his former friend and one of Africa’s most loved leaders, Thomas Sankara, was ousted and assassinated.

He was re-elected president four times since 1991.

Compaore has taken refuge in neighbouring Ivory Coast, where he is living in a luxury villa owned by the state.