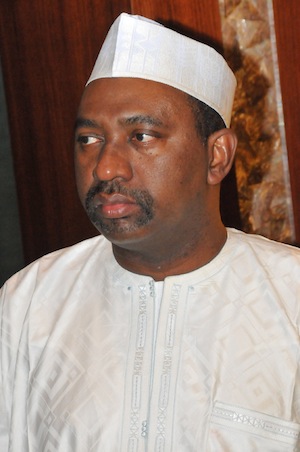 The Minister of State for Finance, Mr Bashir Yuguda, on Tuesday announced that federal, states and local governments had shared N593.33 billion revenue that accrued to the nation in October.

Yuguda made this known in Abuja when he briefed newsmen on the outcome of the Federation Accounts Allocation Committee (FAAC) meeting.

Other component of the money, according to him, is Value Added Tax (VAT) amounting to N67.14 billion.

Giving the breakdown of the distribution of the revenue among the three tiers of government, Yuguda said the Federal Government received N224.26 billion representing 52.68 per cent, and states, N113.75 billion, representing 26.72 per cent.

The local governments, he said, received N87.69 billion, amounting to 20.60 per cent of the distributed revenue.

He also disclosed that N47.12 billion, representing 13 per cent derivation revenue was shared among the oil producing states.

On VAT, he said that the gross revenue collected for the month increased by N2.03 billion to N67.13 billion as against N65.1 billion recorded in the preceding month.

The minister said that the nation generated N420.03 billion as mineral revenue during the period as against N374.74 billion generated in September, adding that the performance indicated a “marked increase” of N45.29 billion between the two months.

“The non-mineral revenue for the month of September is N116.66 billion, which when compared to the N127.36 billion generated in August shows a decrease of N10.7 billion.

“FIRS received N2.47 billion, the Nigerian Customs got N3.83 billion and DPR received N5.17 billion as their cost of revenue collection for the month of September,” he said.

In his comment, the Chairman, Finance Commissioners Forum, Timothy Odah, said that the states were asking for two billion dollars from the Excess Crude Account to enable them complete ongoing projects.

Odah lamented that the states and the local governments were suffering from dearth of fund to carry out meaningful projects at the local levels, adding that there was need for them to create jobs for the people.

He also said that state governments were still clamouring for total removal of fuel subsidy, according to him, is not necessary considering the fact that there is “no enough money”.

“There is no reason giving out what you do not have,” he said.

On the declining global oil price, Odah said the state governments were aware and stressed that diversification of the economy was necessary to cushion the effect of the development “in the long run”.