Jonathan President Of PDP, Not Of Nigeria 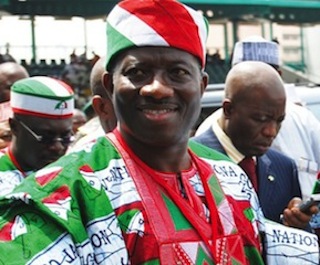 The National Chairman of the All Progressives Congress, APC, Chief Odigie-Oyegun, says President Goodluck Jonathan is the president of the Peoples Democratic Party and not the president of Nigeria given his divide-and-rule approach to governence.

In his speech at the Salvation Rally of the party on Wednesday at Eagle’s Square, Abuja, Nigeria’s capital, Oyegun said that President Jonathan, “embarrassed by the runaway success of APC controlled states, has in the last two years embarked on a wicked scheme to create disaffection among the electorate in APC-controlled states by not funding the Federation Account adequately.

“While this may appear a general problem affecting all states, he has secretly and unconstitutionally been funding PDP controlled states. Not too long ago he dashed all PDP controlled states N2 billion each. Not only does this affect the letter and spirit of our constitution, it also portrays him as the President of the PDP and not that of Nigeria.

“Although oil has been selling at well over USD108 against the benchmark of USD78, President Jonathan had been funding the Federation Account only between 60-70%. What is his official explanation for this? He claims it is as a result of massive crude oil theft that he has been unable to fund the Federation Account adequately! The truth of the matter is that since the countrywide protest on the subsidy oil scam of 2012 and the embarrassing revelations by the House of Representatives panel, this government has now resorted to stealing from source. How can we be losing steadily on daily basis over months the same quantity, 700,000 barrels of crude? It is this stealing of crude at source that has made it impossible for the government to adequately fund the Federation Account, and which has led to poverty and unemployment,” he said.

He asked whether it is not baffling that up till today no serious individual or significant organisation has been apprehended for stealing 700,000 barrels of crude everyday, adding “it is nothing but authority stealing – apologies to Fela Anikulpo-Kuti.

“Only a few days ago, President Jonathan’s administration declared austerity measures. Given the difference between the selling price of our crude in the international market of an average of 108 dollars and the bench mark price of 78 dollars in the last three years, the government should today have close to fifty billion dollars (US$ 50 billion) in Excess Crude Account. But as a result of corruption and arbitrary manipulation of the account, today the government has declared that there is just three billion dollars (US$3 billion) in this account.

“Another pointer that President Jonathan will not allow a free and fair election in 2015 is the reckless use of the police and the military in past elections in Ekiti and Osun states. The extensive use of firearms by PDP thugs in Edo State in collusion with the police to vandalize the Edo State House of Assembly residential quarters, and the police humiliating treatment of the Rivers State Governor Rotimi Amaechi, are a few examples of acts of impunity of this government.”

He said that in Edo State the police continue to disobey the orders of both the High Court and the Court of Appeal.

“In Ekiti State the police looked the other way when judges were being beaten and only two days ago in the same Ekiti under the protection of the police, democratically-elected principal officers of the state House of Assembly were sacked by six out of the twenty-six elected members. The Nigeria police has today become the armed wing of the PDP and they cannot be trusted under President Jonathan to be unbiased umpire in the February 2015 elections,” he said.

He also called for an unambiguous effort to ensure that that 2015 elections will be free and fair, adding that “what you are seeing here today, which is the first stage of the occupation of Abuja, is just a warning shot.

“If we do not see any discernible change of attitude on the part of the government, then we will move to the next stage on the list of actions that our party intends to take to stop the rot being perpetuated by the PDP-led Federal Government.

“We are therefore using this opportunity to alert Nigerians and the international community to what is undoubtedly a set of carefully-set booby traps on the path to free and fair elections next year.

“To Nigerians who are desirous of a positive change, we say eternal vigilance is the price of freedom, and we call on them to join us to say NO to impunity, NO to corruption, NO to scorched-earth politics and NO to do or die politics.

“To the international community, we say it is not just enough to rush to declare any election free and fair on election day. We say election is a process, hence they must show interest in all the pre-election events leading up to the election day.

” In the end, everyone must work together to ensure that the will of the people prevails, that no one who is eligible to vote is disenfranchised, and that every vote must not just be counted, it must count!”