Rooney at the double as England silence Scots 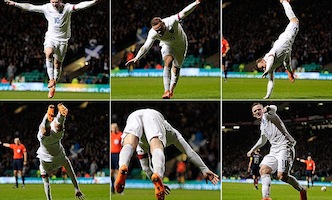 Alex Oxlade-Chamberlain put England ahead at Celtic Park and Rooney scored either side of a late Andy Robertson strike to chalk up his 45th and 46th international goals on his 101st appearance.

It took the Manchester United striker clear of Jimmy Greaves, with whom he had previously shared third place, and left him three goals shy of Bobby Charlton’s all-time record and two behind Gary Lineker.

“We have a lot of young players and we talked before the game about the atmosphere and support Scotland get here,” Hodgson told Sky Sports.

“We handled that well and I thought our fans were fantastic, and they gave a good account of themselves.”

England have now won all six of the games they have played since their group-stage exit at the World Cup, while they will have a six-point lead to protect in Group E when Euro 2016 qualifying resumes in March.

Scotland are also well placed in qualifying, but despite making only one change to the team that beat the Republic of Ireland 1-0 last week — Chris Martin replacing the injured Steven Fletcher — Gordon Strachan’s side were unable to summon the same levels of grit and guile.

“We got together 10 days ago after having improved as a unit throughout the year and our objective was to get three points against a good Ireland side,” Strachan said.

“We got that and we’re pleased, but we’re disappointed to end our year with this defeat.”

The teams emerged to the bangs of fireworks and the flashes of pyrotechnics, and the home fans’ enthusiastic booing of ‘God Save the Queen’ only served to further enliven the atmosphere.

Recalled by England after a two-and-a-half year absence, Stewart Downing lined up on the left of midfield in a 4-3-3 system, rather than at number 10, where he has excelled for West Ham United this season.

Nonetheless, he teed up Gary Cahill to head over with an early corner, while Danny Welbeck shot straight at David Marshall from Rooney’s pass as England made an energetic start to their first game in Scotland since 1999.

Scotland came close with Robertson flashing in a cross that just eluded the sliding Scott Brown, but it was England who went ahead in the 32nd minute.

Jack Wilshere was the architect, drilling a fine flighted pass over the Scotland defence from the left for Arsenal team-mate Oxlade-Chamberlain to glance a header past Marshall.

Both coaches made changes at half-time, with Adam Lallana and Phil Jagielka coming on for England and Craig Gordon, Darren Fletcher and James Morrison entering the fray for Scotland.

It was Gordon’s first Scotland appearance in four years after injuries forced him to take a two-year career hiatus, but the Celtic goalkeeper’s first duty was to scoop the ball out of the net.

James Milner’s right-wing free-kick was only cleared as far as Wilshere, who drove the ball back into the box where Robertson’s attempted clearance sat up for Rooney to nudge a close-range header inside the left-hand post.

In reply, Fraser Forster had to touch a Russell Martin header over the bar, but Chris Smalling almost extended England’s lead when he headed wide from Lallana’s corner minutes later.

Substitutions robbed the game of momentum, only for Robertson to reduce the arrears in the 83rd minute when he beat Forster at his near post after a one-two with Johnny Russell.

“I’ve always loved playing for England,” said Rooney. “I’m on a good run of goals and I hope that continues. If that means I break the record then I’ll be delighted.”