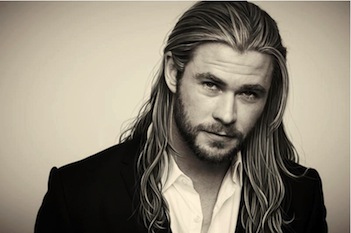 The honour was announced on the late night US TV show hosted by Jimmy Kimmel on ABC and in the magazine itself.

With his face at first masked and his voice digitally modified, Hemsworth, 31, speaking from Australia, toyed with playful yes-or-no questions from the American TV audience.

Kimmel’s instructions and teasers to his crowd: “If you guess correctly, the sexiest man alive will make love to you, so this is big. I will give you three clues. He is sexy, he is a man, he is alive.”

“Are you hairy?” a bearded, balding man in the audience asked, smiling.

“Just up here,” the still unknown masked person asked, gesturing to his head.

Fast forward: the audience zeroed in on the guy as a non-American, buffed dude who is an actor that has played a superhero in the movies, wielding a hammer: Thor in the Marvel Studios superhero movies? Bingo!

“Anything you would like to say to the men who lost, specifically Matt Damon?” Kimmel asked, referring to the popular American actor.

“I like everything there is about being sexy, to pursing the lips the right way to squinting at the essential time. Thank you, Matt, and all the other previous intelligent men. This is based on an IQ test, not just the physical appearance,” the actor said.

Asked if there was anyone he wanted to thank, Hemsworth said, “my parents, I guess, for putting this together.”

In this week’s People cover story, Hemsworth told People he thought it was “pretty funny” when he first heard word of his new status. He is married to Spanish actress Elsa Pataky and they have three children.

“I think you’ve bought me a couple of weeks of bragging rights around the house,” he told the magazine.

“I can just say to her, ‘Now, remember, this is what people think, so I don’t need to do the dishes anymore, I don’t need to change nappies. I’m above that. I’ve made it now.'”