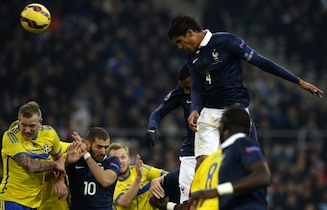 Centre-back Raphael Varane scored the only goal of the game six minutes from time to give France a 1-0 win over Sweden in Marseille on Tuesday.

The result ensured France remained unbeaten since the June-July World Cup as they build up to hosting Euro 2016 with a number of friendlies.

It also went some way to erasing the embarrassment of last Friday’s 1-1 draw with unfancied Albania in Rennes.

But the day belonged to Real Madrid starlet Varane, who at 21 not only scored his first international goal in 17 appearances, but was also captain on the night.

“On top of the fact he was captain, it’s good,” said France coach Didier Deschamps of his match-winner.

“He has a good attacking game with his head and scores for Real Madrid.

“It was good that he managed to break the deadlock.”

Sweden, shorn of star forward Zlatan Ibrahimovic, who plies his club trade in France with Paris Saint-Germain, proved dogged opponents, wilfully manning their defences, but they were finally breached when Varane headed home a corner from Antoine Griezmann.

Despite their toiling to break the deadlock, France were fortunate to count on passionate home support, helped in no small part by Deschamps’s decision to field three players from the Velodrome’s resident club Marseille, as well as a former fan favourite on the south coast in Mathieu Valbuena, currently playing in Russia with Dynamo Moscow.

Not to mention Deschamps himself is a former player and coach at OM.

The major downside for France on the night, though, was another erratic performance from young midfield star Paul Pogba, too often wasteful in his distribution.