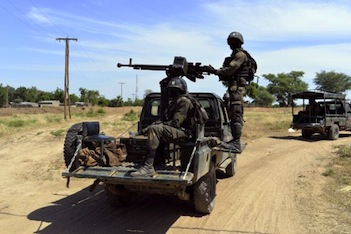 “We’re convinced that the establishment of a ‘caliphate’ (by Boko Haram) is aimed not only at Nigeria but also at Cameroun,” Leopold Nlate Ebale, commander for an elite battalion in the border zone, told AFP.

Boko Haram’s leader, Abubakar Shekau, has said he wants to set up a Nigerian caliphate — recalling the actions of the Islamic State militant group which has taken over parts of Iraq and Syria.

Until recently, Boko Haram had focused its attacks on several Camerounian border posts across from towns it controls in the Nigerian state of Borno.

It has also been using Cameroun as a place to rest and stock up with arms and food.

But its attacks are now spreading further south into the country.

Members of the group have slit the throats of market-goers in broad daylight near the northern city of Mokolo, according to Cameroun’s army.

Meanwhile, rivers between the west African nations are evaporating as the dry season approaches.

“They will no longer have to cross over bridges. They will be able to cross anywhere over the border, at any time, by any means.”

The Islamists have taken some 20 towns in Nigeria and amassed a weapons stockpile seized from Nigerian army bases.

They now use armoured vehicles and landmines as well as kalashnikovs and rocket launchers.

Cameroun’s military is increasingly concerned as Boko Haram fighters approach major cities like Maroua, the capital of the Far North region, which the group is suspected of infiltrating.

Cameroun has deployed around 2,000 soldiers in the northern region and registered 32 deaths since the start of the operation.

Despite the losses, the government says its soldiers are beating back the Islamists.

The authorities regularly announce the killing of hundreds of Islamists during skirmishes, though it is impossible to verify the figures.

Cameroun has some 4,000 elite soldiers, trained by Israeli soldiers, but observers are sceptical about the capabilities of the regular army, particularly in the face of bigger attacks.

“Until now, the military presence has endured major skirmishes. But if Boko Haram decided to launch a major offensive, they could break through Cameroun’s lines without too much difficulty,” said a source close to the country’s intelligence services, requesting anonymity.

The army’s successes up to now were partly due to the fact that the insurgents were sending young, inexperienced recruits to Cameroun, rather than hardened fighters from Nigeria, he said.

“The Boko Haram fighters we’re dealing with are trained in three weeks: the first week they’re given money and drugs, the second week they learn to put together and strip down a kalashnikov, and the third, they’re sent to the frontline,” said a Camerounian officer, declining to be named.

The army, initially criticised for its inaction, also feels increasingly isolated in its fight against the Islamist group.

Hundreds of Nigerian soldiers have fled to Cameroun on several occasions in response to Boko Haram attacks, yet the two countries “share information but nothing more”, according to Cameroun’s defence ministry.

A regional force — with 700 soldiers each from Chad, Cameroun, Niger and Nigeria — is due to be deployed by the end of November, but will mainly concentrate on the area around Lake Chad, in the far north of both countries.