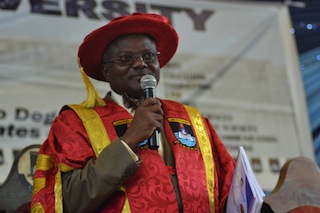 Fresh crisis is currently brewing at the Lagos State University, LASU, with the Vice Chancellor of the school, Prof. John Obafunwa withdrawing the Ph.D certificates of 14 lecturers opposed to his administration in the troubled institution.

The lecturers have also passed a vote of no confidence on the VC, calling for his removal from office for the school to move forward.

Speaking after the meeting of the Lagos Zone of the Academic Staff Union of Universities, ASUU, held at the Ojo Campus of LASU on Wednesday, the lecturers alleged that the authorities of LASU are calling for the withdrawal of the certificates of 14 lecturers with Ph.D  bagged in the school and duly signed by the VC.

According to Dr. Sola Nasir, Coordinator of ASUU, Lagos Zone, the school management decided to withdraw the Ph.D certificates of the lecturers for calling for the reversal of students fees to the old rate of N25,000.

He said this was the plan put in place by the VC to victimise the lecturers for standing up against the management of the ailing institution for demanding for a just right.

The LASU Chairman of ASUU,  Dr. Idris Adekunle said he was among the 14 lecturers whose certificates were withdrawn, saying that this was one way to victimise the lecturers who stood for justice in the school.

“They claim that they intended to look into some matters. They claimed that there was an error on the certificate. But the certificate was signed by the current Vice Chancellor, Professor John Obafunwa. Rather than apologise to me and others for the error, they demanded for my Ph.D certificate,” he said.

He added that “the management claimed that they intended to investigate and without concluding their investigation, they withdrew someone’s certificate. For instance, Professor Tunde Fatunde was interdicted by the institution’s management for being rude to a registrar.”

But LASU VC, Obafunwa, rejected all allegations against him by the lecturers, saying they were only trying to cast aspersion on his integrity and engage in cheap blackmail.

According to him, the lecturers had contributed immensely to the rot in LASU, as he was prepared to purge the school and position it in the right direction.

He added that the certificates claimed to have been withdrawn by the university were actually issued in error, and that the matter could not be swept under the carpet as being advocated by ASUU of LASU.