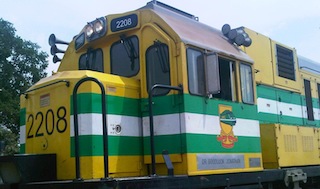 China Railway Construction Corp has signed a deal worth nearly $12 billion with Nigeria to build a railway along the West African nation’s coast, from Lagos to Calabar, Chinese state news agency Xinhua said on Thursday.

The announcement comes shortly after Mexico abruptly scrapped a $3.75 billion high-speed rail contract with a consortium led by the Chinese firm over transparency concerns.

China is pushing to win railway construction projects around the world as part of plans to export its high-speed technology and lift its manufacturing sector up the value chain.

Beijing is also pumping money into the sector, with more than $100 billion worth of infrastructure projects approved in late October and early November in a bid to bolster slowing growth in the world’s second largest economy.

“It is a mutually beneficial project,” CRCC Chairman Meng Fengchao told Xinhua. He added the railway project will lead to equipment exports from China worth $4 billion, including construction machinery, trains and steel products.

Officials at CRCC could not be immediately reached for comment.

The project will create up to 200,000 local jobs, according to Xinhua, helping Beijing in its soft power push to gain a foothold in resource-rich regions of Africa.

The coastal railway will stretch for 1,402 kilometres, linking Nigeria’s economic capital Lagos in the west with Calabar in the east, Xinhua said.