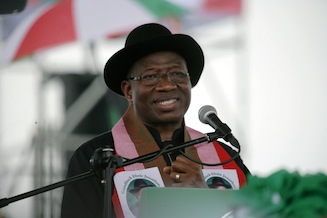 Mogbojuri stated this at the Nigerian Tertiary Institutions Students Skill Acquisition and Entrepreneurship Certification Programme in Partnership with the University of Lagos Alumni Association and Soulful Mind USA.

He said the President Goodluck Jonathan-led administration should create more platforms to develop the Nigerian youths on whose shoulders lay continuous relevance as a nation.

He also called on the Federal Government, all state government officials and corporate organisations to support NITISECP charitable cause for humanity beyond mere wishes and statements.

“We really need their support to make things easier for us. Obviously, we cannot do anything on our own. But if we can have them support us, that would be enough.

“The youths hold this country but cannot shoulder responsibilities without ‘help’. That help is what we need right now,” Mogbojuri added.

Also speaking at the training workshop was the Special Adviser on Education Lagos State, Otunba Fatai Olukoga, who said that he observed most youths are frustrated especially when they are through with their education and find nothing doing.

This, according to him, is because, “most courses available for students in our various institutions are those that prepare them for employment rather than empowerment.”

Olukoga emphasised that for the world to survive, the level of unemployment in Sub-Saharan Africa must be addressed through students’ development into entrepreneurs as against job seekers, since no nation can be considered developed without having a strong enterprise state.

The training workshop identified that there is a lot already being achieved by the organisation in terms of youth development.

However, they highlighted that there are gaps in knowledge about what other organisations are doing in this space, and the potential links that could be developed between organisations.  Selected students of the University of Lagos were trained in various vocational and professional courses.

Representatives noted the positive role the workshop provided in establishing strong linkages between youth development organisations, and recommended that the government support the initiative towards holding these workshops or forums on a regular basis.