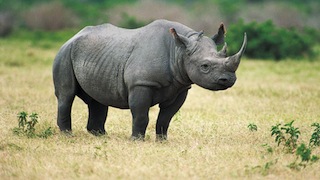 A record 1,020 rhinos have been poached in South Africa this year, the government said Thursday, undermining multiple efforts by authorities to curb the slaughter of the endangered species.

The vast Kruger National Park, has been hit the hardest by poachers, with 672 killed inside the park, which is roughly the size of Wales.

“To date, a total of 1,020 rhino have been killed for their horn since 1 January 2014,” the department of environmental affairs said in a statement.

The poaching crisis has forced the authorities to move a number of rhinos to “safety zones”, some in neighbouring countries.

Last year, 1,004 beasts were poached in parks across the country.

Demand for rhinoceros horn — which is made of keratin, which is also found in hair and nails — has skyrocketed in recent years, largely driven by the market in Asia, where the powdered horn is valued for its supposed medicinal properties.

South Africa has launched a number of initiatives to fight the scourge, including the deployment of the army along the border with Mozambique, a poaching hotspot.

Helicopters are also used to intercept poachers as well as armed ground patrols with sniffer dogs.

“Unfortunately the threat of poaching has continued to escalate while various multi-faceted interventions are being implemented by South Africa,” the Minister of Environmental Affairs Edna Molewa said.

“We are concerned that poaching is part of a multi-billion dollar worldwide illicit wildlife trade. Addressing the scourge is not simple,” she said.